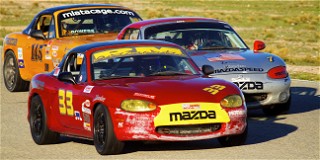 A little chilly when the day began, but both the temperature and racing heated up in the afternoon during Round Three of the SCCA Western Conference U.S. Majors Tour taking place at Willow Springs International Raceway in Rosamond, California.

There was also plenty of action throughout the day’s seven races.  In Group 3, which consisted of seven different car classes, Joe Huffaker in his F Production MG Midget and Brian Linn in a GT-Lite MG Midget ran one and two early on.  But before the race’s halfway point, Wayne Graham in an E Production Mazda RX3 got a fantastic run out of Turn 9 and blew by Huffaker and Linn.  Soon after, Andrie Hortanto’s Super Touring Lite Acura Integra and Oscar Jackson’s Super Touring Lite Honda CRX Si were in hot pursuit.  Graham, Hortanto and Jackson put on a great show the last half of the race.  And even though Graham emerged the overall Group 3 victor, all three drivers slid from their cars with giant smiles.

“I got a good holeshot coming out of Turn 9 and just blew by people,” Graham said after the race.  “But then they came after me in the corners.”

As predicted, the Spec Miata class put on a pretty great show, too.  Dean Busk, Steven Powers and Clement Lee put a gap on the rest of the field early on.  And then the three swapped positions for a dozen laps.  It was Powers that came through a cloud of dust in Turn 9, resulting for another competitor’s off-course excursion, to cross the finish line first.

“This feels great.  It’s incredible,” Powers said.  “Eighth to third on the first lap made me real happy.”

Round Four of the Western Conference U.S. Majors Tour continues on Sunday at Willow Springs with 35-minute races beginning at 10:30am PST. More information can be found at SCCA.com/majors.