At A Glance: Willow Springs Majors This Weekend 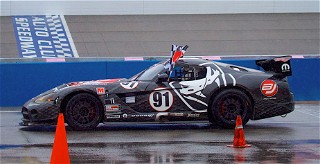 Going Back to Cali: The Sequel -- For the second time in less than a month, Cal Club will host an SCCA U.S. Majors Tour Western Conference race weekend. Unlike the rain-soaked event held Jan. 29-Jan. 31 at Auto Club Speedway, weather for the upcoming weekend at Willow Springs International Raceway looks to be wonderful with temperatures in the upper 60s/lower 70s and no hint of precipitation in the forecast.

A First for Willow Springs -- This will be the first time an SCCA U.S. Majors Tour event will be held at Willow Springs International Raceway. First raced on in 1953, the 9-turn, 2.5-mile “Big Willow” is sometimes lovingly referred to as the “Fastest Road in the West.” The 600-acre complex is home to eight racetracks embracing nearly every conceivable motor sports discipline. The venue is located about an hour north of Los Angeles, California near Lancaster. There are great viewing spots all around the racecourse, so bring a camera … and $10 to gain entry.

Battle Back – In late January at Auto Club Speedway, Formula F pilots Chuck Horn (No. 54/Hotel California/Porter Racing Swift DB6/Honda) and Denny Renfrow (No. 11/Wheely Open Racing Piper DL7/Honda) fought it out on the track’s high-speed banking and twisty infield. Horn edged out a win of just 0.168-second on Saturday, but Renfrow claimed victory on Sunday. Both Renfrow and Horn are scheduled to appear at Willow Springs this weekend to battle again in rounds three and four of the SCCA U.S. Majors Tour Western Conference event.

Spec Miata Spectacle – With 23 competitors slated to appear at Willow Springs this weekend, the Spec Miata Class is likely to put on one heck of a show. Be sure to keep an eye on these folks as they head toward Turn 8, a critical portion of the circuit and what is rumored to be the fastest turn on any racetrack west of the Mississippi River.

Heading North – Rounds three and four at Willow Springs will be the final 2016 SCCA U.S. Majors Tour visit to Southern California. Next, the Western Conference series heads north for an April 8-April 10 event at Thunderhill Raceway Park in Willows, Calif.; followed by racing April 29-May 1 at Buttonwillow Raceway Park in Buttonwillow, Calif.

Largest “Class” of the Weekend – Numbering almost 50 entrants, by far the largest single “Class” of the weekend consists of wonderful volunteers that have stepped up to make the Willow Springs SCCA U.S. Majors Tour event happen. SCCA is a membership organization and, as such, utilizes volunteers to put on events. These saints organize, register, score, officiate and work flag stations during race weekends. No event is possible without the help of these classy volunteers.