At A Glance: This Weekend’s Auto Club Speedway Majors 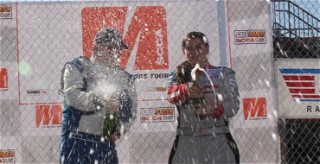 Going Back To Cali: The Cal Club-hosted event at Auto Club Speedway is the traditional opener for the Western Conference Championship. While Friday and Saturday look like stereotypical Southern California weather days, that pesky entrant El Nino may factor into Sunday’s races. Sunday’s races are 18 laps, but also limited to 35 minutes, which may become a factor if it rains.

Production Prizes: When we last saw Brian Linn and Jason Isley, they were side-by-side and sliding across the finish line at Daytona International Speedway during the H Production National Championship race. Linn took the gold medal, Isley the silver, and both are back in action across the country this weekend.

Though they’ll be on track together, there won’t be a rematch. Linn has moved to F Production for 2016, and will pilot his new-to-him No. 21 Hoosier Tire/Carbotech/Meeker & Son/LinnSpeed MG Midget. But Isley doesn’t necessarily get a pass this weekend in his No. 99 TRD/Hoosier/RACER.com Toyota Yaris. The CRX that Linn drove at the Runoffs is now back in the hands of owner Steve Hussey as the No. 37 LinnSpeed/CW Horton Honda CRX.

Cleaning Up: Also on the entry list this week is the No. 12 Goodyear/Cyclo/Redline Oil Jaguar XKR of eight-time National Champion Michael Lewis. Lewis, the defending National Champion in GT-1, also captured a Super Sweep with his win at Daytona in September.

The Super Sweep award goes to a driver who wins his Conference, the National point standings, a key named race throughout the season and caps it off with a Runoffs win. This weekend’s Sunday race at Auto Club Speedway is one of those 10 select races – so drivers can start to earn their Super Sweep prize this weekend.

Working Nine To Five: SCCA is a membership organization and, as such, utilizes volunteers to put on events on a local level. Even the top level events, such as the U.S. Majors Tour, depend on volunteers to organize, register, score and officiate the race weekend. While those holding the flags on the corners are the most visible, more than 50 volunteers are involved this weekend in each aspect of the doubleheader, putting in countless hours behind the scenes.

Live Timing & Scoring, lap notes and more via the SCCA® Pit Board are available for all sessions here.