What to Watch: Sebring Majors 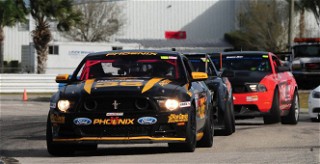 The Southeast Conference of the U.S. Majors Tour moves along to Sebring International Raceway this weekend for the second half of back-to-back action in Florida.  Here are some storylines to help you through the weekend.

Sunshine State Driving Tour: For the third consecutive year, Florida plays host to the opening two weekends of U.S. Majors Tour action. The two-stop state tour began a week ago at Homestead-Miami Speedway and continues this weekend at historic Sebring International Raceway.Many of the 323 drivers on the Sebring entry list made the trip in to escape the snow and cold to run both events.

Champion Drivers Through The Field: Throughout the field of drivers at Sebring are champion drivers from across the Club. Darren Seltzer is a Tire Rack Solo National Champion beginning his second season in B-Spec, while Brian Schofield has long been the benchmark for Spec Racer Ford, and now the Gen 3 car, in the Southeast. Jim Drago is the only repeat National Champion in Spec Miata, and Andrew Aquilante (entered in both American Sedan and GT-2) has been one of the hottest drivers in the Club the past two seasons. Johnpaul Ciancimino is the defending Prototype 1 National Champion, and multi-time champion Don Knowles appears in Touring 4. Robert Allaer, in Formula Continental, is a champion in Group 7 this weekend. While others dot the list, this rundown shows how hot the competition is in each class.

Worker Bees: Though the coverage and conversation often revolves around the drivers on the track, more than 130 volunteers are in Sebring this weekend to put on the event. SCCA Club members make up the entirety of the worker core as volunteers during Majors event, ranging from registration to pit and grid to flagging and communications to, of course, the officials in charge of monitoring the on-track activity and rules enforcement. These volunteers are a core part of SCCA events.

Get more information throughout the weekend including results, news, and live updates at scca.com/sebringmajors.

Photo: Andrew Aquilante returns to Sebring for Round 3 and 4 of the season.Credit: Mark Weber