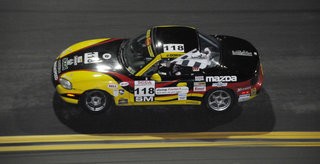 Runoffs rookie Jonathan Goring qualified in sixth position for the Spec Miata race at the 2015 SCCA National Championship Runoffs presented by Garmin VIRB at Daytona International Speedway. That race was unique in the history of the Runoffs because it was the first Runoffs race ever run at night under the lights. To top off the challenge, there had been rain before the race, leaving competitors to face a very wet – but drying – track. Goring chose dry tires for the race, and worked his way up to third position on lap 13. He moved into second place and passed for the lead in the second half of the final lap to claim the 2015 Spec Miata National Championship – arguably one of the most difficult SCCA National Championship titles to claim.

"Nothing miraculous has happened – I haven't gotten that phone call from Roger Penske yet," Goring jokes. "But definitely interest in my coaching business has picked up, and interest in me as a driver has picked up. I'm going to be working for Tech Sport Racing in the Pirelli World Challenge series. I will be the data and telemetry analyst and driver coach. I got that opportunity at least somewhat as a result of winning at the Runoffs."

Read the full story at Racer.com.