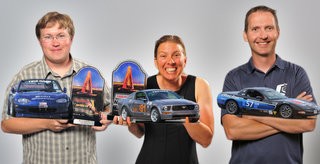 TOPEKA, Kan. (Dec. 22, 2015) – Billy Davis, Carol Kolk and Grant Reeve are the finalists for the 2015 SCCA Solo Driver of the Year after taking home national titles at the Tire Rack Solo National Championships. The winner will be honored at the SCCA National Convention as part of the Hall of Fame and Awards Banquet presented by Mazda on the evening of Jan. 23, 2016 at the South Point Hotel and Casino in Las Vegas.

This will be the second consecutive year that the top autocrosser will be honored as part of the Hall of Fame celebration that puts a period on the SCCA National Convention. The President’s Cup winner, the counterpart for the top driver in Club Racing, will also be announced as part of the festivities.

“Congratulations to each of these three drivers on their successes throughout 2015, and I’m not sure how the Solo Events Board could narrow this down to one winner,” Lisa Noble, SCCA President and CEO, said. “We look forward to finding out which of these deserving drivers is selected, along with meeting our newest Hall of Fame class and honoring all of our Club’s top performers.”

Davis, of New Haven, Connecticut, was nominated after claiming an SCCA National Championship in C Street Prepared by a dominating 1.966-second margin of victory. In doing so, he became the first repeat champion in the class since 1988 and also recorded the top indexed time at the 2015 National Championship event.

Scoring her second National Championship by 0.591-second in E Street Prepared Ladies, Kolk, of White Lake, Michigan, is also up for the award. Her previous national title was in A Street Ladies, in 2007, by beating out another top driver and National Champion, Laura Campbell.

Reeve, of Sturbridge, Massachusetts, beat out 32 other drivers to win the Super Street R crown by 0.004-second. To claim the title Reeve finished ahead of some tough competition including Sam Strano, Matthew Braun, GJ Dixon and Anthony Savaini, all of whom share a combined 18 National Championships.

The award will be given out during the same celebration that Hubert Brundage, Bob Henderson, Roger Penske, Randy Pobst and Alec Ulmann will be inducted into the SCCA Hall of Fame. In addition, as part of the banquet, will be the presentation of the SCCA Member of Excellence, the RallyCross Dirty Cup and the Woolf Barnato Award.

The 2016 SCCA National Convention will be held at the South Point Hotel and Casino, in Las Vegas, Jan. 21-23, with the SCCA Hall of Fame and Awards Banquet presented by Mazda on Saturday night, beginning at 7:00 p.m.

Admission to the Convention and the Hall of Fame and Awards Banquet is still available. For additional information, including the ability to register for this event, visit www.SCCA.com/convention.

Image: From left to right, Billy Davis, Carol Kolk and Grant Reeve are the three finalists for the Solo Driver of the Year award.
Credit: Rupert Berrington/SCCA