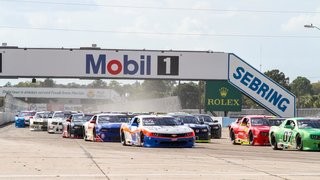 In March of 1966, 44 cars took to the track at Sebring International Raceway in what was the first running of the then entitled “Trans-American Sedan Championship.” On March 6, 2016, the Trans Am Series will take to the track at Sebring once more, fifty years later, to commence the 2016 Trans Am Championship and a year-long celebration of Trans Am’s past, present and increasingly bright future.

The Trans Am Race Company has officially announced a 12-event schedule for the 2016 Trans Am Championship, the 50th Anniversary Season of the Trans Am Series, with many of the same venues from 2015 returning for the upcoming season along with the Series’ return to Watkins Glen, its first appearance at the legendary track since 2013.

“The 2016 Trans Am Championship is a celebration of 50 years of Trans Am Racing,” said John Clagett, President of The Trans Am Race Company. “This Series has seen so much, so many legends of our sport and history-making races. We’re ready to pay homage to that like never before. Trans Am made more history in 2015 with record setting fields and a return to the racing you expect of the Trans Am name; now we’re ready to eclipse that in 2016 as we celebrate our 50th Anniversary and prepare for one of our best seasons yet.”

All three Trans Am classes, TA, TA2 and TA3, will participate at each stop on the Championship schedule—one that sees the season once more kick off at Sebring International Raceway before heading to Road Atlanta for an earlier, standalone, date on April 10. Next, the Series will make its return to Watkins Glen on May 15h, before continuing with stops at New Jersey Motorsports Park with F4 and Formula Lite, Brainerd International Raceway and then a two-race stint alongside the NASCAR Xfinity Series at Mid-Ohio Sports Car Course and Road America.

After an appearance at Virginia International Raceway, another of Trans Am’s original homes in the 1966 season, alongside SVRA, Trans Am will head south to finish up the season beginning with a new date at Homestead-Miami Speedway with F4 and Formula Lite on October 9th, before finishing up in the same fashion as 2015 at NOLA Motorsports Park, Circuit of the Americas and Daytona International Raceway.

“We see this schedule a perfect mix of Trans Am’s past, present and future,” said John Clagett, President of The Trans Am Race Company. “It has the historic tracks that Trans Am has called home for most of its existence: Mid-Ohio, Road America, Road Atlanta, Brainerd International Raceway, Sebring, where it all began, and our return to Watkins Glen. Yet at the same time, we are racing at places like Circuit of the Americas, NOLA Motorsport Park, Homestead-Miami and New Jersey Motorsports Park—places where we are working to create new traditions and new homes for the future.”

The schedule also continues Trans Am’s ongoing partnership with the Sportscar Vintage Racing Association; as the two entities will feature alongside each other at Sebring, VIR, NOLA, and Circuit of the Americas.

“In SVRA we have the perfect partner to help celebrate 50 years of Trans Am Racing,” continued Clagett. “In SVRA’s field you find cars that made their mark in Trans Am, and you will see them alongside their modern counterparts in our Series throughout the year. We’re particularly pleased that the Historic Trans Am cars will be joining us at Sebring to kick off the year—bringing back some the most iconic Trans Am cars of all time to start the year in style.”

The 2016 Trans Am Championship will conclude at Daytona International Speedway, in conjunction with Historic Sportscar Racing (HSR), for the fourth year in a row on November 12, 2016.

For more information about the Trans Am Series visit GoTransAm.com