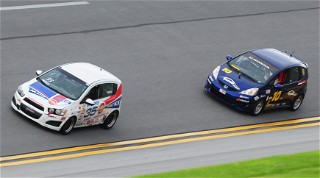 DAYTONA BEACH, Fla. (September 25, 2015) – John Heinricy, of Clarkston, Michigan, moved into a tie for second on the all-time National Champion list after racing to a B-Spec victory in the No. 35 Hoosier/Mobil/Hawk/Matick Chevy Chevrolet Sonic in the SCCA National Championship Runoffs presented by Garmin VIRB at Daytona International Speedway. David Daughtery, of Fortville, Indiana, finished second after leading the most race laps in the No. 10 HPD/Carbotech/Hoosier/Honda of Fisher Honda Fit and Brian Price, of Middletown, Virginia, finished third in the No. 51 Unlimited Auto Body RP Performance Honda Fit.

Heinricy, who tied Duane Davis with 13 career National Championships for second on the all-time list, started the race from the Tire Rack pole but immediately had to deal with challenges from the competition.

Price was the first to show he had something for Heinricy and took the lead on lap three.

“I was on John’s bumper, I had a plan to stay with him, and if the other Honda guys caught me we would work together,” Price said. “But John and I worked together, he had an off in Turn 1 and I got in front.”

Daughtery, after starting fifth, then paired up with two other Honda competitors in the top five to draft down Price and Heinricy up front, taking the lead on lap five.

“My car has always been good at the front this week,” Daughtery said. “With Brian pushing me, another Honda, it doesn’t matter who was pushing me, I was pretty darn on it. Brian and I had the fastest trap speeds earlier in the week, and it showed in the race.”

With the laps winding down, the race came down to a battle between Daughtery, Price and Heinricy.

“There was a lot of sizing up, a lot of sizing up going,” Heinricy said. “Possibly at the end of the straight I might have made a move to go around, but I didn’t know for sure, and I thought if I do, I don’t know what I am going to do in front anyway. We just kept it all straight, kept all three of us going to see how it would sort out at the end. That was my strategy.”

The three leaders ran in a tight pack before Price bobbled in the bus stop chicane two laps from the end.

“Just that one time I got in a little deeper, I had to lift, and that was all she wrote,” Price said. “On a front wheel drive car, if you lift, the car turns sideways, and we were already sideways, and instead of trying to keep and go through the cones and all, I just went through the grass and that was it.”

While Price recovered to finish third, Daughtery and Heinricy took the race down to the wire. On the last lap, Heinricy held back a car length as he trailed Daughtery down Daytona’s backstraight to set up a slingshot move going into the “bus stop” chicane, pulling off a pass that proved to be the winning one.

“If I had a good run out of Turn 6 and got on him early, I thought I could get him at the bus stop,” Heinricy said. “As it turned out I had that good run and that was really what did it right there.”

Image: No. 35 John Heinricy tied for second on the all-time National Championship list with his 13th title Saturday with a victory in the B-Spec race at the SCCA Runoffs presented by Garmin VIRB.
Credit: Mark Weber