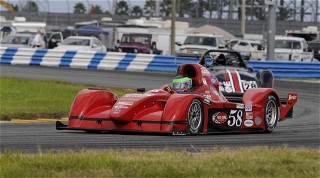 Farrell started the race from the Tire Rack Pole and was never seriously challenged in the 14-lap race on the 3.56-mile Daytona International Speedway road course. The winning Margin of Victory was .957 of a second.

“This one is pretty sweet,” Farrell said. “My first one at Road America was also very sweet, Laguna Seca was nice last year, but this one was the toughest race this year. Jeff kept me more honest than I really wanted to be. I had to drive my butt off to keep ahead of him.”

Shafer, who set the fastest race lap at 1:52.355 (114.067 mph), was frequently within two seconds of Farrell but was never close enough to attempt a pass for the lead.

“On the last lap I was the closest and for the most part the traffic I think every time benefitted me,” Shafer said. “I had to make a couple kind of sketchy passes to make sure Chris didn’t get away. I just had a great time. Chris was just outside of my reach for most of the race, we hit traffic and I thought for a moment I could take advantage of him, but he did well in traffic too and kept the gap he needed.”

Farrell and Shafer worked under the same tent this weekend and their teams traveled to Daytona together.

“Jeff and I were under the same tent, he actually brought my stuff out here, and I want to thank him,” Farrell said. “It was really nice of him as a competitor to bring me here and it was great racing with him.”

Chao improved from fifth on the grid to finish third, making up for a DNF in his Runoffs debut last year at MRLS.

“Hopefully I showed a little bit more of who I am as a person and a driver this year,” Chao said. “I have only been at Daytona this year but I still had an advantage over the other guys on the podium who have never been here before. I am very, very grateful for how things have unfolded this year.”