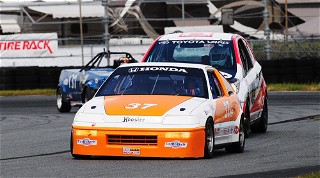 DAYTONA BEACH, Fla. (September 25, 2015) – Prior to the SCCA National Championship Runoffs presented by Garmin VIRB coming to Daytona International Speedway, predictions were for a wild finish. It came true in H Production on Friday afternoon, when Brian Linn, Jason Isley, and A.J. Hulse spun across the finish line together, with Linn, of Hermosa Beach, California, named the winner. Isley, of Coto De Caza, California, and Hulse, of Sebastian, Fla., crossed just after, with neither of the three pointed forward.

Isley’s No. 99 RACER.com/Hoosier/TRD Toyota Yaris held the lead coming out of the bus stop on the final lap of the 14 lap race, but took a huge wiggle and ran through the grass. Charging behind were the No. 37 Hoosier Tires/LINNspeed/Hussey Honda CRX of Linn and the No. 137 Hoosier/App. Race Tire/Linfert Perf. Volkswagen Cabriolet of Hulse, who went three wide just shy of the start/finish line.

Linn and Hulse made contact, sending Hulse, on the outside, toward the wall on the tri-oval and Linn to the inside, toward Isley. Linn spun across the bumper of Isley, sitting almost perpendicular to the Toyota as he was pushed across the line. Hulse, after contacting the outside wall, crossed the finish line backward in third.

Despite missing the podium ceremonies, neither Hulse nor Isley were injured in the incident.

It’s the first National Championship for Linn, who has finished on the podium five previous times. Linn averaged 84.795 mph for the 14-lap race at the 12 turn, 3.56-mile course.

“It feels awesome to hear National Champion with my name,” Linn said. “I’ve tried for a long time, and here we are. It feels great.”

Isley led the opening 11 laps of the race, including two laps under a full course caution, before giving way to Linn on lap 12. The pair got together on the final lap, side by side through the infield, and dropped Linn to third behind Hulse, setting up the final dramatics.

“I was leading the last lap and messed up into Turn One, and Jason closed up on me and got through, and forced me off a little bit going between one and three, and AJ got by me too and I thought I gave it all away,” Linn said. “But I thought I was close enough as we came out of six and onto the banking that I still had a chance to run them down because the draft was so effective in my car.

“We went through the bus stop and Jason got a little sideways, and I thought his exit was compromised. A.J. had a run on him, and it looked like he was going to make it around and he saw me coming on the outside. He threw the block and I kept my foot in it, and the carnage happened after that. I hate to tear up cars, but blocking like that at 130 mph is kind of crazy.”

William Perry, of Sale Creek, Tennessee, and Michael Ogren, of San Antonio, Texas, completed the top five. Perry challenged Isley for the lead prior to the full course caution, before sliding back.

Rob Horrell, in the No. 91 Horrell Group Architects Honda CRX, was the Sunoco Hard Charger after improving from 18th on the grid to a ninth place finish.