Lewis Runs Away with GT-1 National Championship Win at Daytona 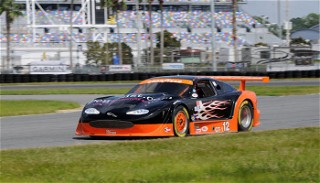 At the controls of the No. 12 Goodyear/Pegzlist.com Jaguar XJR, Lewis was the Tire Rack polesitter and took the lead into Turn One. That was all Lewis needed to run to the checkers in GT-1 at the 3.56-mile, 12-turn Daytona International Speedway circuit. He finished the race with a 50-second gap back to second place.

“As Stewart [Bachmann] said, it was a lonely race out there,” Lewis said. “I wasn’t pushing the whole time and had backed off once I had built a good gap. Coming in, we were fast in every session and everything was running smoothly. That’s when you really begin to worry.

“Just this morning we took a hardship lap to check a gearbox rebuild, and blew the exhaust off the car. Luckily, the guys were able to get it fixed before the race. You never know in this game. Coming in, when you have a little bit of a gap, it’s just more nerve-wracking than if you are in a battle.”

Bachmann needed each of the 14 laps of the GT-1 race to run down Busch to take second place. In the No. 68 EXSYS/Eppinger/Hooseir/Mobil 1 Chevrolet Camaro SS, Bachmann ran fast laps from beginning to end, which proved to be the one of the reasons Bachmann was able to catch and pass the wounded machine of Jack Busch.

“Because of some issues on the grid, we actually started third instead of fifth,” Bachmann said. “I never have seen or talked to Michael [Lewis], so now that I’ve finished in second place I was able to shake his hand. It was your own track out there, for the most part. I was just staying consistent and hoping to be there at the end. Many thanks to my driving coach John Heinricy and all the guys that work on the car. Of course, thanks to my wife for supporting me.

“This is my first time running a sequential gearbox. We got it Thursday of last week and installed it. This is my first year of major racing, so I figured I’d take the 75-pound penalty and use the sequential box. It was a whole new learning curve, so it was a little detrimental in the beginning of the week. We were able to get faster as I got used to the new equipment.”

In the No. 105 Spectro Oils/Hoosier Tire/Leifert Moto Ford Mustang, Busch looked to have second place all sewn up. However, as Bachmann was making his way through the field, it became clear that Busch was in trouble and not just running quickly enough to secure second place. Running laps that were off the race pace, Bachmann began to take huge chucks of time from the lead of Busch. While Busch tried to pick up the pace, Bachmann was still gaining. Bachmann completed the pass just before Turn Four.

“In the latter portion of the race we ran into some issues with the gearbox,” Busch said. “So, we tried to run the rest of the race in fourth gear, which didn’t work as well as I had hoped. That was our problem. I wished I had gotten a little more of a gap between myself and Bachmann so I could have held him off there. At that point, my thought was just to try to make it to the end and what we end up with we get.”