Kachadurian makes Last-lap pass for a National Championship at Daytona 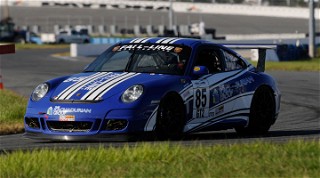 Kachadurian scored his first National Championship in dramatic fashion, passing then-leader Jordan Bupp on the last lap. At the controls of the No. 85 The Kachadurian Group/Fall-Line Porsche 911 Carrera, Kachadurian spent much of the 14-lap race behind Bupp. After Bupp took the white flag in the No. 81 American Speed Factory Ford Mustang, his car produced a puff of smoke as he slowed for Turn Two. The small bit of smoke proved to be a foreshadowing of what was to come.

As Bupp was making his way through the infield section of the 3.56-mile, 12-turn course, his machine gave out. That allowed Kachadurian to make the pass for the lead in Turn Five. Bupp was unable to complete the final lap, rolling to a stop short of the completing the final lap.

“It hasn’t fully set in yet,” Kachadurian said. “I have been battling for this for a number of years. Mark [Boden] has really helped me as I started in Spec Miata, then moved to a BMW in Touring 2 and then made the jump to the Cup car in GT-2. I’ve been on the podium before, but not on the top step, always the bridesmaid and never the bride. It’s good to finally be at the altar.

“It was a tough race, everyone had a great start. Jordan never put a wheel wrong and he was just running hard the whole time. I just tried to be a gnat and stay in his mirrors throughout the entire race. I was ready to settle for second, but saw a puff of smoke come out of Bupp’s car on the final lap. Unfortunately for him, he started to slow down and I was just able to make it around him. I felt like if it wasn’t him, it was going to be me this weekend.”

Kennedy drove his No. 118 Daytona One Performance Lubricants Ford Mustang to the second step on the podium in his first trip to the Runoffs. On the final lap, Kennedy pushed his machine to the limit heading into the bus stop chicane. Kennedy won the braking duel with over Boden to take the second position.

“This is my home track, so I love racing here every chance I get,” Kennedy said. “On the second day of qualifying, I was able to get up to second. However, I didn’t go out the last two days, so that dropped me back to fourth. I wasn’t happy starting there, but I knew that wasn’t a big deal here at Daytona.

“Mark [Boden] raced me so cleanly; I never had to worry about running closely with him. I was just so happy to get by him going into the bus stop. It wasn’t anything he did; I just went in there as deep as I could not knowing what was going to happen. I was just fortunate to finish where I did.”

Boden, in the No. 47 Fall-Line Motorsports Porsche 977 GT3 Cup, scored his eighth Runoffs podium finish at Daytona. Starting third, Boden had some early-race issues which caused him to lose a position early on in the race. He was able to gain the position back later in the race and moved to second momentarily as Bupp dropped out of the race. However, Kennedy’s last-lap pass dropped him back to third.

“It was a good week of qualifying,” Boden said. “Yesterday, we really got everything together. We were able to go from eighth on the grid to third. We got a good initial start in the race, but had an issue getting into fourth gear going into the first corner. That hurt us as we lost a spot or two, there. We had another issue causing us to drop back to fifth. From there, we bided our time and did what we could to hold our gap.

“As we came into the bus stop for during the last lap we ran into lapped traffic. I didn’t time the traffic quite right, so Bobby [Kennedy] was able to make the pass and get around me. He drove a great race.”

Image: John Kachadurian was the benefactor of a mechanical issue that befell leader Jordan Bupp to take his first National Championship at the SCCA Runoffs Presented by Garmin VIRB at Daytona International Speedway.
Credit: Jay Bonvouloir