SCCA Workers of the Year Awarded at Daytona During Runoffs 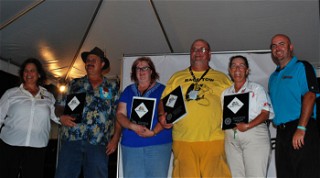 In addition, winners of the 28 Tire Rack pole awards were recognized in front of their fellow event participants. In addition to the festivities, SCCA President and CEO Lisa Noble and SCCA Vice President and COO Eric Prill recognized and thanked the Club’s official partners as well as the drivers and workers for making the event possible.

Kevin Cullen, of Newark, California, was honored as the top worker in Emergency services. Cullen, a Club member since 1995, is part of the San Francisco Region and has worked in several volunteer positions within Club Racing. For his work in Flagging and Communications, Jim Hooker, of Gulfport, Florida, was honored as the top worker in his field. Hooker has been a continuous member since 1996 and also holds regional licenses in race control, course marshal and as a starter.

Lyn Watts, of Silver Springs, Florida, took home the award in the Pit and Grid category. A continuous member since 1987, Watts also holds a national license in race administration. Paula Hawthorne, of Monroeville, Pennsylvania, holds a national-level license in Flagging and Communications but will be honored for her work in Race Administration. A member of the Steel Cities Region, Hawthorne has been a continuous Club member since 2008.

In the area of registration, Sue Green, of Morrison, Illinois, has been a continuous member since 1986. Green holds licenses in three other disciplines, including fire-rescue, race administration and race control. Green lists the Blackhawk Valley region as her home region. Tim Lee, of Oakland Park, Florida, was the top honoree of all scrutineers. Lee has been a continuous member since 1978 and also holds a full competition license.

Marcia Ulise, of Newark, California, has been a continuous part of the club since 1978. She was awarded for her work as a starter, but also holds national licenses in flagging and communications, race administration and scrutineering. Taking the award for worker of the year amongst race stewards was Tom Brown, of Lucas, Texas. Brown holds a license as a national steward and has been with the Club continuously since 1990.

Anna Crissman, of Pittsboro, North Carolina, was awarded for her work in timing and scoring. She has been a continuously active club member since 2001.

Each award winner was presented with a plaque commemorating their achievement and a jacket with the award logo embroidered on the back. In addition, winners in each discipline were given a $50 certificate for SCCA Gear. After all the hardware was given out, SCCA President and CEO Lisa Noble randomly drew from the pot of winners to award one lifetime SCCA membership. The membership was given to Hawthorne.

Along with the racing and worker awards given out, a winner of the golf cart decorating competition was the zebra-decorated cart. The winner of the competition was chosen based on the amount of money collected by each entrant, which totaled $1,244.95. All proceeds were donated to Maxton’s Fight, a 501(c)3, non-profit foundation that supports families and children affected by childhood diseases.

Three days of SCCA National Championship races from the 52nd SCCA Runoffs Presented by Garmin VIRB begin, Friday at 9:00 a.m. (EDT). Friday Night Lights Presented by Mazda will serve as the nightcap to a full day of racing. The field of 62 Spec Miatas will take to the Daytona International Speedway under the lights, beginning at 7:30 p.m. (EDT).

Additional information on the SCCA Runoffs Presented by Garmin VIRB, including an event schedule, entry list and full results, can be found at SCCA.com/Runoffs.