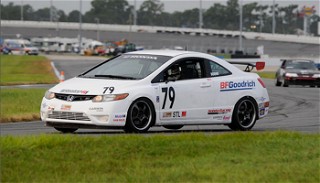 DAYTONA BEACH, Fla. (Sept. 24, 2015) – The variable Florida weather affected qualifying for the second consecutive day during the lead up to the 52nd SCCA Runoffs Presented by Garmin VIRB. Slick track conditions in the morning, with the addition of two showers throughout the day, led to tough track conditions for many qualifying sessions on Thursday.

Regardless of the less-than-ideal track conditions that existed at points, five drivers were able to make their final qualifying sessions count by snagging Tire Rack pole positions in advance of Friday, Saturday and Sunday’s National Championship races.

Scott Rettich, of Columbus, Ohio, made history on Thursday as he captured the Tire Rack pole position in Formula Enterprises. At the controls of his No. 17 Alliance Autosport/pdiarm.com Formula Enterprises, Rettich tied Jerry Hansen as the only other driver in Runoffs history to start a National Championship race from the top position seven consecutive years in the same class. The last of those consecutive poles of Hansen’s was in 1981, three years before Rettich was born.

Michael Varacins, driving the No. 65 Speed Sport Engineering/Veetech Mysterian M2 Volkswagen, also had the opportunity to match the mark set by Rettich and Hansen. However, Varacins fell just 0.08-second short of getting his seventh consecutive Formula Vee pole. Instead, Roger Siebenaler took home the Tire Rack pole position with a best lap of 2:32.167 that he set during Tuesday’s qualifying session in his No. 72 Autowerks/Hoosier Mysterian M2. Varacins will start on the outside of row one.

Despite some wet spots still remaining on course, Kevin Boehm, of Marysville, Ohio, was able to leapfrog Cliff Ira to snatch the Super Touring Lite Tire Rack pole position for himself in the morning’s first on-track session. Boehm, at the controls of his No.79 BFGoodrich Tires/Honda Racing/HPD Honda Civic Si Coupe, stepped up his performance on the final day of qualifying by finishing with a best time of 2:09.672, while defending champion Ira will start on the outside of row on his time of 2:09.824 from Tuesday.

John Heinricy, of Clarkston, Michigan, completed the quest for the B-Spec Tire Rack pole position for Friday’s race in his No. 35 Hoosier/Mobil/Hawk Performance/Matick Chevy Chevrolet Sonic. Heading into the final session, Heinricy needed to push all his chips to the middle of the table. Since the end of Monday’s qualifying, Heinricy had not been able to claim the top spot in the standings. Both Chi Ho (No. 07 BFGoodrich Tires/HPD/Dynasty Automotive Honda Fit) and Brian Price (No. 51 Unlimited Auto Body/RP Performance Honda Fit) sat on the provisional pole at one time during the final session will start the B-Spec race in the first two rows.

In Formula 1000, J.R. Osborne, of Englewood, Colorado, waited until the final qualifying session to show what his No. 83 Geartronics/Hoosier/MoonsSupercycle Ralph Firman RFR1000/Kawasaki really had. While the second-place driver, Kevin Roggenbuck, did not go out in the final session, Alex Mayer (No. Technonects/OMS/JDR Race Cars JDR) fell just 0.3-second short of matching Osborne’s Tire Rack pole time of 1:50.711.

Tim Kautz, of St. Charles, Ill., made a huge move during the final qualifying session in his No. 88 Braeburn/Hoosier/Two Dogg/Euroquipe Piper DF3D Honda Formula F. Kautz started the session as the provisional fourth-place starter, but threw down a lap of 2:02.289 – a time no other driver could match. Jeremy Grenier was the provisional Tire Rack polesitter before the session, but was only able to muster a lap of 2:04.128 during the last session in his No. 21 Ski Motorsports/Hoosier/Quicksilver Citation 07 Honda. Grenier, the defending champion, will still start Sunday’s race second on the strength of his Tuesday lap.

Formula 500 also saw a change at the top of the class standings. Clint McMahan, of Covington, Ga., piloted his No. 34 Simcraft/F6R/Satellite Racing Scorpion FDS to the Tire Rack pole position. McMahan ended Thursday’s session with a 0.4-second edge over Calvin Stewart’s best lap, which came on Tuesday. On Thursday McMahan registered a 2:01.824, while Stewart finished the four days of qualifying with a best lap of 2:24.052 in his No. 07 Novarace LLC/Sabbathtruth.com NovaKar Blade F600/Suzuki.

Each of the 27 races, over three days, will be carried live on SCCA.com beginning on Friday at 9:00 a.m. EDT. Dorsey Shroeder, Greg Creamer, Rick Benjamin and Jeff Lepper will split time in the broadcast booth, including Creamer and Schroeder on the call for Spec Miata during Friday Night Lights presented by Mazda at 7:30 p.m.

Additional information on the 52nd SCCA Runoffs Presented by Garmin VIRB at Daytona International Speedway, including a full schedule, entry list and results, can be found at SCCA.com/Runoffs