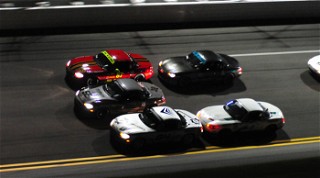 DAYTONA BEACH, Fla. (Sept. 22, 2015) – Tuesday’s qualifying for the SCCA Runoffs Presented by Garmin VIRB at Daytona International Speedway was capped off with the first official Runoffs session under artificial light. This marked the halfway point of qualifications in preparation the weekend’s three days of racing.

While the on-track action during the day was close, nothing compared to what happened once night fell and the lights were turned on for the second of four Spec Miata qualifying sessions at the 12-turn, 3.56-mile road/oval circuit. A total of 59 Spec Miata drivers got their first, and only, taste of what it is like to race under the lights at Daytona prior to their 7:30 p.m. (EDT) start on Friday to decide the next SCCA National Champion. When the 25-minute session was completed, Andrew Carbonell, of Miami, was the quickest in the session. After sitting out the first qualifying session, the driver of the No. 79 BSI Racing Mazda Miata knocked Todd Lamb’s No. 84 Atlanta Speedwerks/SpeedShift Transmission Miata off the provisional Tire Rack pole.

In B-Spec, Darren Seltzer, of Orlando, Florida, took the class lead away from multi-time National Champion John Heinricy. Seltzer, in the No. 64 BFGoodrich Tires/HPD Honda Fit. is a former two-time Solo National Champion and Runoffs rookie, but with the help of drafting partner Chi Ho’s No. 07 BFGoodrich/HPD/Dynasty Automotive Honda Fit has the time to beat at the midway point of the week.

Yufeng Luo, of Arcadia, California, holds onto his position at the top of Formula Continental. The 16-year-old’s No. 13 Pabst Racing/China Van Diemen DP08 is just 0.322-second ahead of defending National Champion Robert Allaer’s No. 52 LTD Motorsports/Martini/Coors Light Van Diemen RF02.

In Formula Mazda, 18-year-old Joseph Burton-Harris, from Australia by way of Birmingham, Alabama, jumped to the top of the time sheets in his No. 132 SI Partners/Sydney Sports/GMG Formula Mazda. Heading into Tuesday’s second qualifying session, defending Champion Mike Anderson was the provisional Tire Rack polesitter, but was unable to match the pace shown by Burton-Harris.

In Formula Atlantic, Tyler Hunter, of Denver, has carried the fastest lap in the class through two days of qualifying. Hunter did not even turn a lap in the No. 22 Swift 014a/Toyota, on Tuesday, but he still holds a 1.3-second lead over Swan Motorsports teammate Michael Mallinen’s No. 71 Swan Motorsports/Mazda/Hoosier Swift 016a/Mazda.

The differences between Monday morning and Tuesday afternoon qualifying sessions were no more apparent than during Spec Racer Ford. Both Kerry Jacobsen, of nearby Deland, Florida, and Cliff White, of Huntsville, Alabama, held the provisional Tire Rack pole positions they captured on Monday in Spec Racer Ford and Spec Racer Ford Gen 3. The warmer temperatures slowed the front of both fields on Tuesday.

Jim Dentici, of Oconomowoc, Wisconsin, was able to get the best of Joe Huffaker in GT-Lite. Huffaker still holds the provisional Tire Rack pole in F Production, but Dentici was able to push his No. 11 Raglin Racing/JDM Group Honda CRX to a more than one-second advantage over Huffaker’s No. 77 Huffaker Engineering MG Midget.

Jeremy Grenier, of Charles Town, West Virginia, clawed his way to the top of the Formula F field in his No. 21 Ski Motorsports/Hoosier/Quicksilver Citation 07/Honda. Tim Kautz, a two-time Champion in the class, rode to the top during Monday’s qualifying, but the defending champion, who started the day in sixth, moved to the top by almost a whole second.

The SCCA Runoffs rolls on from Daytona, on Wednesday, with another full day of qualifying. Cars will roll off the grid at 8:00 a.m. (EDT). Formula F and Formula 500 will make up the first group to hit the circuit.

Additional information on the 52nd SCCA Runoffs Presented by Garmin VIRB at Daytona International Speedway, including a full schedule, entry list and results, can be found at SCCA.com/Runoffs.