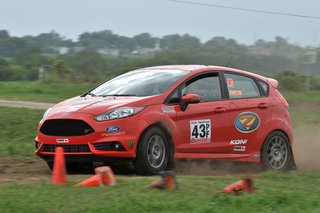 INDIANOLA, Iowa (Aug. 9, 2015) – Nine new SCCA RallyCross® National Champions were crowned in the 11th edition of the season-ending competition for the RallyCross community on Sunday, in what many called one of the smoothest-run events in the championship’s history. It was the culmination of a two-day competition that kicked off the SCCA National Championship season.

This year’s meet was the first that the season-ending event was held in Indianola. The new site proved to be well-received by competitors and event organizers, alike. The area was an enjoyable challenge for each of the drivers, as a different soil consistency and sizable elevation changes rewarded those able to adjust most quickly.

While RallyCross is most easily described as a Solo competition held on dirt there is one big difference between the two types of competition, the scoring. Unlike Solo, which only adds together the two best single runs from each course, RallyCross winners are determined by adding together the times of all runs taken throughout the weekend. As a result, consistency across each run is the key to taking home a national title.

Mother Nature played a significant role in the weekend’s competition. Saturday morning started with wet conditions. Before the grass surface of the site was turned into a dirt path, the course was very slick. But that changed dramatically, as the day wore on. As more wet dirt was exposed, the course became increasingly slimy. Adjusting the changing conditions, on the fly, became very important.

In Modified Front-wheel Drive, Kent Hamilton, of Anchorage, Alaska, put in a dominating performance. En route to a 13.806-second margin of victory, Hamilton drove his EMC Engineering/Hamilton Motors Honda Civic to a best-of-class lap of 58.098 seconds on his final run of Sunday. Hamilton was one of the drivers that took advantage of an early run on Saturday to set the tone and never looked back as he kept his momentum intact throughout the rest of the competition.

“I was the second car on course on Saturday,” Hamilton said. “Everything was just super greasy, and I do a lot of ice racing back home where you have to hunt for traction, and I just tried to drive a tight line and minimize how far I had to drive.

“It feels fantastic to repeat. The modified class has gone way up in terms of competition. Everyone seems to be getting faster. This was a great facility. The courses were really fun, and I just had a great time.”

John Lambert fended off 12 other drivers in Modified RWD to claim the class national title, while Warren Elliott, of East Haddam, Connecticut, won Modified AWD and made history as the first driver to become a five-time RallyCross National Champion.

In Prepared, Greg Cheney, of Shawnee, Kansas, drove his SeckFord.com/Wahoo Autocross Ford Fiesta ST to a Front-wheel Drive National Championship be a narrow margin, compared to some of his fellow title winners. Cheney didn’t utilize flashy mind-blowing times to win the crown; instead he put together a long line of consistently-quick times to take the victory.

“The course changed just about every run,” Cheney said. “Saturday’s conditions were really muddy and sloppy and we had some really tight courses with a lot of esses on the side of the hill. Guys were really sliding around. I was lucky enough, in Kansas City about three weeks ago, to run a local RallyCross where we had a bunch of rain the day before, just like we did here. So, I was able to set the car up for the mud.

“I did that and made some different adjustments than what some other people made. When we got out there, it was really slippery. I just went out there and pushed it, while a lot of guys were kind of slow and getting balled up in the mud. They just couldn’t climb the hill. I grew up working the oil fields in western Kansas, so I was used to driving in mud like that. After everyone had taken their first run, I ended up 11 or 12 seconds ahead of everyone else. From that point on, I just tried to hold the lead.”

Patryk Matecki was dominant in Prepared Rear-wheel Drive, winning his class by a margin of 41.210 seconds in his Bristol Brewing/Shorai Technology Mazda Miata. Max Lawson was unable to win by as large a margin as Matecki, but was still able to bring the title home with a 22.665-second gap in his Mitsubishi Evolution.

In Stock Rear-wheel Drive, Tim Hardy, of Colorado Springs, Colorado, was the on-track victor by a relatively narrow margin of 6.179-seconds in his MAZDASPEED/Thanks Patryk! Mazda Miata. Hardy notched solid times during his seven runs on Saturday, but sealed the deal on Sunday with three class-topping runs.

Additional information on the SCCA RallyCross National Championships, including full results can be found at here. To find more facts on the entire RallyCross program, visit SCCA.com.