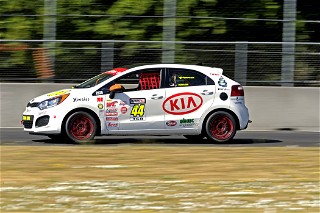 In B-Spec, Eric Boucher finished third in his No. 35 “The Wife” Mazda2, behind contender Derrick Ambrose in the No. 71 CorkSport Mazda Performance Mazda2 and sitting National champion Kyle Keenan in his No. 44 Kia Motors of America/Hoosier/Dick Hanna Kia Rio, but that was enough to allow Boucher to claim the Conference honors.

Marco Gallaher claimed his title in Spec Miata, driving the No. 8 First Community Bank Mazda Miata to a second place finish behind Brad Green in the No. 7 www.WaCarProperty.com Mazda Miata. Collin Jackson took another victory in the No. 53 BM&M Screening Solutions Nissan 240SX and claimed his Conference championship.

In Formula F, Daniel Swanbeck took the title in the No. 27 BigWheels.net/SmugMug Piper FF. Rick Payne in the No. 75 Payton Pools Van Diemen/Honda had been the points leader going into the weekend, but strong finishes by Swanbeck allowed him to take the lead.

Dennis Andrade in the No. 87 D&D Racing Vortech claimed the Western Conference Formula Vee crown with another win today.

Results from the Western Conference finale at Portland can be found here.