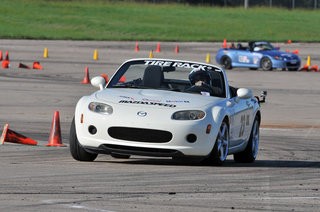 TOPEKA, Kan. (June 17, 2015) – Registration for the 2015 Tire Rack Solo National Championships Presented by Garmin VIRB, scheduled for September 8-11, in Lincoln, Nebraska, has gone live. As classes are filling for the year-end event, details regarding contingency prizes for top finishers across all classes have been made public.

As with many forms of motorsports, manufacturer support is an important component to SCCA Tire Rack Solo competition. A number of auto makers have decided to financially support their customers who score top finishes at the Tire Rack Solo National Championships.

Mazda, the Official Vehicle of SCCA, will bestow a $1,000 prize on all eligible National Champions. The remaining podium positions will also receive $600 and $300, respectively. Eligible drivers who also take home the Solo Triad Award will get a $1,200 bonus.

Honda Performance Development will also be offering prizes to top-three finishers in Lincoln. Eligible drivers will earn a payout of $500, $300 and $100 for a podium finish, in that order. The Solo Triad Award is worth an additional $500.

MINI USA will be awarding eligible drivers $1,000 for a class Championship. Second place is worth $500 and third will get $250.

Scion Racing and Toyota/TRD are offering eligible winners a $1,000 prize for a class win. Subaru of America rounds out the manufacturer support with a program that awards $1,000 to eligible class winners, with second earning $750 and third taking home $500.

Like the auto manufacturers, tire makers have thrown their support behind many classes at the SCCA Tire Rack Solo National Championships.

BFGoodrich Tires will offer a complete set of four tires to eligible class winners. Second-place finishers will be able to get their hands on two tires, while third place is worth one free tire.

Bridgestone will be offering cash prizes to eligible drivers in select classes. A National Championship title is worth $500, with the remaining podium positions able to claim $300 and $100, respectively.

Falken Tire has also pledged their support for the National Championships by offering cash to eligible top three finishers. First place is worth $1,000, while second can take home $500, followed by $300 for third.

Hankook Tire will also offer cash to top finishers at the Tire Rack Solo National Championships. An eligible driver finishing first can receive a $1,000 payday, while second and third can take $800 and $500, respectively. Additionally, Hankook will also be awarding $1,000 to eligible Solo Triad Award winners.

GT Radial and Hoosier Tire are offering identical programs for eligible drivers at Nationals. Both companies will award eligible drivers with a set of four tires if they can claim a National title, while second place is worth two tires.

Toyo Tires has pledged their support, as well. The company will offer eligible drivers a $1,000 prize for winning their class. Second place will be worth $750, while third can claim $500. An eligible Solo Triad winner can also score a $1,000 bonus.

It takes more than just a car and tires to make a racecar go. That’s why a couple companies outside of those two realms have thrown their support behind this National Championship event.

Garmin VIRB, the Official Camera of SCCA and the presenting sponsor of the Tire Rack Solo National Championships, has offered up the awards for top finishers. A prize of $200 cash, or a $300 product certificate, awaits eligible winners. Second place, in class, is worth a $100 product certificate.

Many of these programs require pre-registration before the event. Be sure to read all details regarding each specific program by clicking here. It is the responsibility of each competitor to make sure they are in compliance with each program for which they would like to enroll.