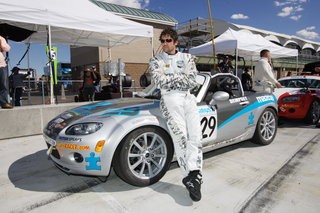 Thirsting for some professional sports car racing action this weekend? How about catching the most famous professional auto endurance race in the world, the 24 Hours of LeMans. Why should I watch, you ask? Here are six SCCA-related reasons.

Three-time National Champion and two-time Trans Am Champion Scott Sharp will be making his second appearance at the around-the-clock classic. This time it will be with Extreme Speed Motorsports in the LM Prototype 2 class, of which Sharp is a co-owner. Also part of the driver lineup is Johannes van Overbeek, who ran in the 1995 edition of the National Championship Runoffs and Pirelli World Challenge regular Ryan Dalziel. The team has spent this season acclimating to the European racing circuit as they have run the two FIA World Endurance Championship events, preceding LeMans, and have plans to run the remainder of the WEC calendar.

Also racing in LM P2 is Swede and Pirelli World Challenge regular Nic Jonsson. In World Challenge Jonsson pilots the factory-backed Kia Optima. Across the pond, Jonsson will be at the wheel of a Krohn Racing Ligier JS P2/Judd.

Former SCCA Pro Racing Battery Tender Mazda MX-5 Cup competitors Marc Miller and Patrick Dempsey will take the green for this weekend’s race. Miller, who finished as high as third in the Championship in 2009, will be driving the Riley Motorsports SRT Viper GTS-R in the LM GTE Amateur class. Also driving in the class will be Dempsey, at the wheel of the Dempsey-Proton Racing Porsche 911 RSR. While the class title says amateur, these guys are far from that. The entry list for this class is chock full of top-tier drivers looking to score the win at one of the most famous race courses in the world.