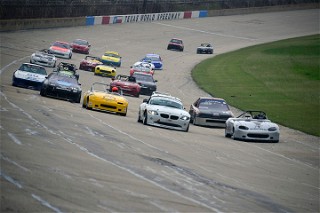 College Station, Texas (May 23, 2015) – Starting the morning in sticky Texas conditions, day one of the Texas World Speedway Majors served as Round Five of the Mid-States Conference 12 Round Championship. Drivers in 28-Runoffs eligible classes took to the 15-turn, 2.9-mile course in what is anticipated to be the final national-level SCCA event held at the venue.

The day started with each of the seven race groups completing a 25-minute qualifying session that would set the grid for the afternoon’s 25-minute sprint races. Many of the drivers used the first, or last, half of the session to put down their fast laps, saving the car for the rest of the weekend.

As the day progressed, weather conditions cooled slightly as scattered showers moved into the College Station area following the lunch break. Many of the race groups ran unaffected, while the last two groups had to deal with increasingly slick conditions produced by the rain showers.

Reaction from the class winners can be seen here:

Additional information on the TWS Majors, including full results and schedules, can be found at SCCA.com/TWSMajors.