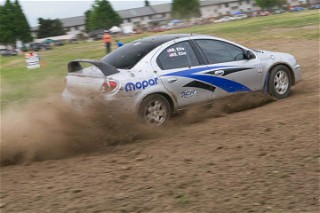 HILLSBORO, Ore. (June 27, 2008) – Mirroring the strong turnout for the SCCA RallyCross Eastern States Championship the weekend prior at Summit Point Motorsports Park, the Western States Championship at the Washington County Fairplex hosted a large and diverse group of cars and drivers, including two 2007 RallyCross National Champions. One such former Champion was Brent Blakely, who was back on the Stock All-Wheel Drive scene in his Subaru Impreza STi. He could not match the pace of Tim Werner’s Jeep Comanche, however, which outpaced all the SA Subarus and took a convincing win. Stock front-wheel drive was also dominated by one driver, that being April Smith in a Suzuki Swift. In Performance Front-Wheel Drive, Chris Sample drove a Volkswagen Rabbit GTI to victory by more than seven seconds over the Volkswagen Jetta of Sanders House. Vern Johnson was the Performance All-Wheel Drive winner, piloting a Mazda 323GTX to a 19.283-second victory over the Subaru WRX of Dan Breene. Modified Two-Wheel Drive produced the closest finish of the event. The Dodge Neon of Sam Ellis was quickest out of the box, but Kris Lilly in a Volkswagen Rabbit GTI followed his first coned run with six fast and clean ones, taking over the M2 lead. Ellis countered with three flawless runs to end the day and captured the class win by a slim 5.6 seconds. Another 2007 RallyCross National Champion, Eric Genack, was competing in Modified Four-Wheel Drive, the largest class of the event with 14 cars. It would not be Genack’s class to win though, instead it was the Subaru Impreza of James Rachner who took the honors, finishing 9.933 seconds ahead of second place Max Johnson. RallyCrossers will have to wait out July until the next RallyCross National Challenge event, August 3, at Corcoran Lions Park in Corcoran, Minn. For full results from the RallyCross Western States Championship and more information about upcoming RallyCross events, click the green Rally tab at the top of the page.