Site of RallyCross Nationals Will Move to Iowa 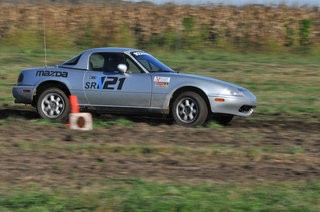 TOPEKA, Kan. (Feb. 27, 2015) – The Sports Car Club of America announced that Indianola, Iowa, will be the location of the 2015 SCCA RallyCross National Championships. The competition site itself is a patch of land owned by the National Balloon Classic that is used as a parking lot for the annual festival. The balloon festival with tens of thousands of spectators will be the week before the RallyCross Nationals, which is scheduled for Aug. 7-9.

Both the venue and date changes came as a result of member concerns that arose from the 2014 event. This will be the third site in as many years that will host the year-end event. The choice to move from the I-80 Speedway, in Greenwood, Neb., which hosted last year’s event, was the result of some unanticipated weather circumstances that made the facility less than ideal for a National Championship meet.

The Iowa site that will host this year’s Championship was found as a result of an exhaustive country-wide search. The Des Moines Valley Region has experience with the administration of a RallyCross event at this very location. Aside from the local region having utilized the site in the past, the fact that the tract of land is used for parking tens of thousands of festival goers suggests that the ground will be well-packed.

The move in date also hopes to be beneficial for the meet. As the event will be held in early August, weather conditions should be much warmer and drier than those experienced in October.

“We are very excited to be able use the parking area for the National Balloon Classic (http://www.nationalballoonclassic.com/) for this year’s RallyCross National Championship and to work with the community of Indianola,” Sr. Director of Solo and RallyCross Howard Duncan said. “This new site will provide participants with all the elements to have an exceptional championship event; great courses on a superb surface, warm weather, plenty of paddock space, on-site buildings for social functions, and proximity to a metropolitan area. We look for the 2015 RX Nationals to be the best yet!”

In addition to the date and location change, a National Championship committee was formed. They will work with the RallyCross Board and national office staff to help organize all aspects of the event. The overall goal is to help foster a more social feel to the meet. The new committee has been challenged to make this year’s event the most fun RallyCross Nationals in the program’s history.

Further information on the National RallyCross program can be found at SCCA.com/RallyCross. Details regarding this National Championship event will be made available as they are determined here.