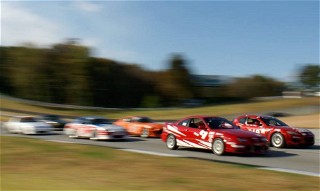 TOPEKA, Kan. (March 16, 2015) – A less restrictive rule set for both drivers and cars and a unique scoring method to balance the field highlight the SCCA’s Bracket Enduro program, set to run on a limited basis in 2015 and grow dramatically in 2016.

The events will feature 4 classes. The first will be an all out pace event, whoever goes the farthest the fastest wins. However, the other three will use a format that balances cars and teams through time allowances, similar to drag racing. Teams will have a variety of options, including tire choice and set up, to run within their target times. The SCCA Bracket Enduro will debut at Thompson Speedway Motorsports Park, June 6-7.

“We really wanted to build a program that made endurance racing truly affordable, but at the same time without limiting what people could spend,” Heyward Wagner, SCCA Director of Experiential Programs, said. “As we looked across the motorsports landscape, we found what we were looking for in a variation of the bracket racing model commonly used in drag racing.”

The format is designed to also appeal to former racers who may have found that their race car no longer fits well in traditional SCCA sprint racing. While to be eligible, performance potential must not exceed GT-3/Touring 3/E-Production, ITR, one of the founding principles of the program is that there are no illegal cars. If it passes safety inspection, and is deemed eligible, it is legal regardless of configuration or modification.

“We want to encourage creativity, in preparation and strategy,” Wagner said. “This should be viewed as really fun challenge. And with the team element, it becomes something that families and friends can do together without breaking the bank. I think that is a win-win."

The SCCA Bracket Enduro is designed to create a fun, fair and affordable way for racers to experience team endurance racing, allowing a wide range of preparation, investment and performance to compete on a level playing field.

Each event will have four classes, with the first an “open” race class. The additional three classes will be set by a delta lap time. If a car runs quicker than its target lap, the time is multiplied by 1.5 and put into a bank. Bank time is paid back in pit lane.

Class Two and Class Three will be based on SCCA ITR and ITB lap times. Class Four will be set three to five seconds slower than ITC. The variation in classes will allow for fast cars and drivers to still go as fast as they can, while also allowing less prepared cars or those on street tires to have a place to play.

Races are expected to typically run at least seven hours, with a 24-hour race on the horizon.

The SCCA Bracket Enduro will use an essentially open rule set, with the exception of safety equipment and performance limitations to an SCCA Club Racing GT-3/IT-R/Touring 3/E Production level set by the existing Club Racing Experience rule set. Tires can be racing slicks or street legal.

“We would love for this program to appeal to competitors in other budget minded endurance racing programs, but we also want to reach out to current and past Club Racers,” Wagner said. “There are a lot of parked race cars out there. Some may have become uncompetitive, others may have become too expensive to campaign. This program fixes both of those problems.

“An older prod, GT or IT car can run street tires, with a modern, reliable stock motor and good brakes . not only will it be legal, it can win.”

Drivers participating in the SCCA Bracket Enduro will not be required to hold SCCA competition licenses.

The scoring for the SCCA Bracket Enduro has two distinct methods.

The first class is open – simply, like traditional rules, the car going the furthest prior to the checkered flag is the winner.

The additional three classes are based on a delta time for each lap. Each lap that falls under the target time (times 1.5 as a penalty) will go into a bank that must be served in addition to the minimum pit stop length. Teams may continue to work on the car during the banked time payback.

Banked time will be kept electronically and automatically through the race app, available to all competitors and spectators.

For example, if the delta time is one minute, and a driver runs a lap of 59 seconds 10 times, the team would need to pay back 15 seconds of time (10 total seconds, times 1.5) before the end of the race.

Each team will choose the class to compete in when they register, but may change their classification after the test and tune session.

More information, and a complete rule set, on the SCCA Bracket Enduro series can be found here, or by clicking the "Bracket Enduro" tab on the Club Racing page.. A list of Club Racing Experience rules is available for download here.