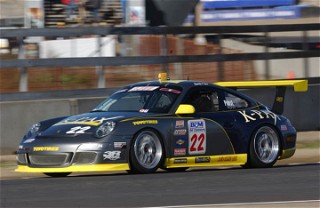 MONTEREY, Calif. (October 20, 2007)  Current Championship leader Randy Pobst, of Gainesville, Ga., captured the pole for Round Ten of the SCCA Pro Racing SPEED World Challenge Championship minutes after collecting the SCCA SPEED Touring Car Pole at Mazda Raceway Laguna Seca. Andy Pilgrim, of Boca Raton, Fla., will start second.Preventing a Cadillac clinch of the SCCA SPEED GT Manufacturers Championship Presented by RACER and giving himself another five points in his Drivers Championship lead, Pobst recovered from a first lap slide to put the No. 22 K-PAX Racing LLC/Jim Haughey Porsche 911 GT-3 on pole. Just after getting out of his pole-winning Mazda SCCA SPEED Touring Car, Pobst collected his 22nd-career pole with a lap of 1:29.707 (89.812 mph) around the 11-turn, 2.238-mile road course. He now needs to finish third or better to win the 2007 Drivers Championship, regardless of what his rivals do.The Cadillacs are right there, Pobst said. When youve been racing as long as I have you learn that sometimes you finish on the good end of the thousandths and sometimes you finish on the bad end of the thousandths. Thats just the game and I think we got lucky.I hate to come right out and say this, but I blew my first lap in the Porsche. I got off to a good start, but I noticed that the handling was quite a bit different than practice, which surprised me, because in Touring Car, the Mazda was very similar. The Porsche was not terribly happy that first lap, but the first lap is when you have the most grip. I had real trouble getting around those first couple of corners. I was going down to my brake point in Turn Five and I got so far to the right that I put two wheels on the curb. I think that curb was a bit wet or maybe it was the roughness and being on the edge, but I got the car sideways and screwed up the corner. I came out for my second lap, knowing that it would have to be the lap. The handling was getting better at the same time, so that second lap around, I put in a clean lap and it was just barely enough. It was luck on my part.Pilgrim is indeed, right there, only 0.057-second behind Pobst. Pilgrim had hoped to win the pole and clinch the Manufacturers Championship for Cadillac, but a 1:29.764 (89.755 mph) put the No. 8 XM/Mobil 1/Motorola/Bose Cadillac CTS-V second on the grid.The second row will be near-identical to the first, with Pobsts teammate, Michael Galati, of Olmsted, Ohio, starting third in the No. 23 K-PAX Racing LLC/Jim Haughey Porsche 911 GT3, after entering a 1:30.121 (89.399 mph). Pilgrims teammate, Ron Fellows, of Mississaugo, Ont., starts fourth in the No. 16 XM/Mobil 1/Motorola/Bose Cadillac CTS-V, turning a 1:30.209 (89. 312 mph).James Sofronas, of Newport Beach, Calif., completed the top five in his No. 14 GMG/Tolar Manufacturing Porsche 911 GT-3, with a time of 1:30.516 (89.009 mph).Although there are three Porsches in the top five, to Cadillacs two, if a Cadillac finishes in the top six, the automaker will capture its second SCCA SPEED GT Manufacturers Championship.Jeff Altenburg (Dodge Viper), Michael McCann (Dodge Viper), Lawson Aschenbach (Cadillac CTS-V), Mike Davis (Ford Mustang Cobra) and Brian Kubinski (Chevrolet Corvette) completed the top ten.The SCCA SPEED GT finale will launch from a standing start tomorrow at 2:55 p.m. (PDT). Live timing and lap notes are available at www.world-challenge.com. The race will air on SPEED, Sunday, October 28, at 4:00 p.m. (EDT).