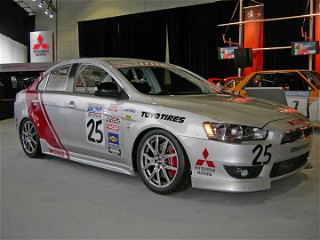 LOS ANGELES, Calif. (Nov. 27, 2007) At the recent Los Angeles Auto Show, the curtains were pulled on the new WORKS built Mitsubishi Lancer, set to compete in the 2008 SCCA Pro Racing SPEED World Challenge Touring Car Championship.WORKS, which is known as the preeminent Mitsubishi tuner in North America, views the move to SPEED World Challenge as a great opportunity to showcase the new Lancer and bring Mitsubishi back to World Challenge after a seven year absence.To get involved in professional racing with a manufacturer whose vehicles inspired WORKS to start in the first place is a dream come true, stated WORKS founder and CEO Peter Kang. We are looking forward to a challenging and successful year in SPEED World Challenge. Coming right on the heels of its grand opening at Infineon Raceway in Sonoma, Calif., this announcement marks another major step for WORKS as they continue to expand in the motorsports world. "Mitsubishi Motors North America is pleased to be associated with WORKS, and we look forward to their successful efforts in the SPEED World Challenge races," said Jun Asami, Vice President of Marketing and Public Relations at MMNA. "The SWC Lancer is certain to demonstrate the strength of this all-new Lancer platform and give tuners worldwide inspiration to customize their cars."With significant research and development time already invested into the project, the WORKS SWC Lancer will continue its efforts through the off-season with the goal of running a full racing schedule for the 2008 calendar year. Two-time (2005 and 2006) United States Touring Car champion David Brown will be spearheading the driving effort for 2008. Everyone at SCCA Pro Racing is excited about the return of Mitsubishi to World Challenge, SCCA Pro Racing President and CEO Bob Wildberger said. Certainly the competitiveness of the series and high-profile events make SPEED World Challenge the perfect place for Mitsubishi and WORKS to showcase the new Lancer. I welcome them to our paddock and look forward to seeing the WORKS Lancer go head-to-head with our other teams.The WORKS SPEED World Challenge Lancer already boasts an impressive build list including front and rear WORKS/Ãhlins coilovers, WORKS two-piece rotors featuring Brembo aluminum calipers, a WORKS racing clutch with Spin flywheel and a fully built and balanced Mitsubishi four-cylinder engine. Inside the car there is a WORKS Throw short shifter with Grab shift knob, WORKS carbon fiber panels, a single Recaro Pro Racer seat, Tilton pedal assembly and a custom roll cage installed by Impact Engineering. Pending final homologation, the SWC Lancer will receive a few more racing and performance parts from WORKS and their partners before heading to tracks across the US and Canada. For more information about where to see the WORKS Lancer racing with SCCA SPEED World Challenge, visit www.world-challenge.com

WORKS is an automotive engineering, tuning, and racing organization dedicated to enhancing modern sports cars. Their passion for motorsports is deeply rooted in Mitsubishi. Starting out as the first Mitsubishi Evolution tuner in the U.S. WORKS has since expanded its expertise to other sports and racing machines, but still puts a strong emphasis on Mitsubishi tuning. With a devoted group of Engineers on staff that have over 30 years of combined technical expertise in the automotive performance industry WORKS remains committed to their mantra of Power, Precision and Passion.