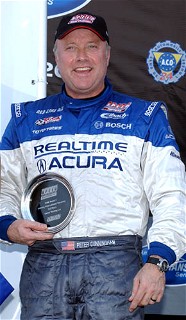 Twelve men, ranging from multi-time professional series and SCCA Club Racing Champions to series administrators and those who strive to put up-and-coming American road racers on an international stage, have accepted membership invitations to the Road Racing Drivers Club.The names of the 12, culled from nominations by current RRDC members and selected for membership into the club, were announced today by RRDC President Bobby Rahal.Active racers include Peter Cunningham, Alex Gurney, Justin Pritchard, Chuck Hemmingson, Kris Skavnes, and Tommy Riggins. Cunningham created and owns RealTime Racing, Acuras factory team in the SCCA Pro Racing SPEED World Challenge Touring Car Championship, and has 79 career race wins in major North American professional road racing series. Gurney, 33, a son of long-time RRDC member Dan Gurney, is the defending 2007 Daytona Prototype driving co-champion in the Grand-Am Rolex Sports Car Series.Pritchard is a three-time SCCA Runoffs National Champion with five pole positions since 1996, and winner of the RRDCs Mark Donohue Award in 2002. Hemmingson is a two time Runoffs Champion, and Skavnes is the winner of the 2005 Donohue award. Hemmingson and Skavnes are also multi-race winners in the Grand-Am KONI Challenge series. Riggins is a class winner in the 12 Hours of Sebring. In the IMSA Kelly American Challenge series, he progressed from Mechanic of the Year in 1982 to series champion in 1984-85, then came back in 2003 to win Grand-Ams Rolex Series GTS class Drivers Championship. The new member list also includes Charlie Kemp, a stalwart of the SCCA Can-Am series in 1973 in a Porsche 917/10, then the IMSA Camel GT in a Ford Mustang.Winning races and championships on either the professional or amateur levels is laudable, said Rahal, but what also carries great weight for RRDC membership is the type of person they are, as well as what theyve done for the business of road racing and its future. These have been the clubs interests since it was formed in 1952.Two new RRDC members, driver insurance consultant John Gorsline and journalist Jeremy Shaw, have done much for road racing. A former magazine editor, Shaw created the Team USA Scholarship which sends selected American drivers to England to compete against that countrys best. Among the programs graduates are Andy Lally, Jimmy Vasser and A. J. Almendinger. Although new RRDC member John Gorslines company is widely-known for insurance packages geared to the needs of auto racers, since 1994 Gorsline has made a financial investment in the careers of up-and-coming racers through the Human Performance Institute Scholarship, and a Driver Performance Enhancement Program. Doug Mockett began his career in road racing in 1961-62 as a crewman for late RRDC President Mark Donohue, and then went into racing broadcasting before becoming a promoter of motorcycle races. He has been a successful racer of Vintage cars from New Zealand to Monaco to the Monterey Historics, provides his stable of vintage Formula One cars to young American drivers to showcase their skills to a new audience of potential sponsors, and has been a significant supporter of the development of young American road racers. Fred Clark is one of the original 3000 members of the Sports Car Club of America, was a crewman for other racers, then a semi-professional driver. To give back to racing, he has chaired many SCCA race events, been a SCCA Regional Executive and is co-chairman of the 45th anniversary of Formula Vees. Grand-Am President/CEO Roger Edmonson also had a 25 year career in race series management. He created the Championship Cup Series for motorcycles in 1984, a series which grew to 3,000 riders. He then operated the road racing programs for the American Motorcyclist Assn. (AMA) and was a member of the FIM Road Racing Commission. There is no set number of how many new members we welcome annually, added Rahal. This just happens to be a year when a lot of exceptional people were nominated. Each of them has done things both in and out of the public view to shine a positive light on sports car racing, and for that, we thank them.About the Road Racing Drivers ClubThe Road Racing Drivers Club was formed in 1952 with a goal to serve the future of road racing by mentoring new drivers on both amateur and professional levels. The RRDC has more than 150 active members. The Clubs President, Bobby Rahal, along with David Letterman, owns the 2004 Indianapolis 500 winning team, and is the 1986 Indy 500 winner. John Fergus is the Clubs Vice President/Treasurer, and Don Knowles is the Secretary. In addition to members lending their expertise to up-and-coming drivers, the Club presents three annual awards: the Phil Hill Award during the Rolex 24 At Daytona weekend, for rendering outstanding service to road racing; the Mark Donohue Award for personal spirit and performance at the SCCA Runoffs; and the Bob Akin Award for speed with style  passion, sportsmanship and contribution to motorsports.Learn more at www.rrdc.org.