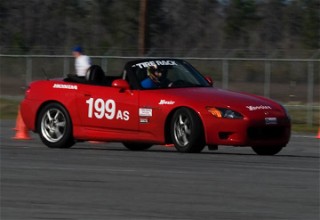 CECIL, Ga. (Feb. 28, 2008)  It may not be March quite yet, but that didnt stop the opening round of the SCCA Tire Rack® Solo National Tour from coming in like a lion and out like a lamb. A record number of entrants for a Tour season opener braved harsh weather early at the Dixie National Tour, but were rewarded with sunshine and great competition. The skies were ominous as Soloists arrived for the Friday test day at South Georgia Motorsports Park. The fury was finally unleashed in the afternoon with hard rain, hail and 50 mph winds sending everyone for cover and delaying the set up of the course until nightfall. When the first heats began on Saturday morning, the course remained damp, but a sunny sky and temperatures in the 70s dried it out quickly. The new bar code system proved more cooperative than the weather and scoring issues were practically non-existent. The driver identification system combined with timing software upgrades and an improved grid setup allowed the event to operate with remarkable efficiency, even with a record 278 entrants.Hats off to Darrin DiSimo for his off-season timing and scoring work, SCCA Vice President of Rally & Solo Development Howard Duncan said. The Dixie Region did a fantastic job as well, improving event operations in almost every way. If the opening event is any indication, this is going to be a great year for the Tire Rack Solo National Tour.DiSimo, of Coral Springs, Fla., can also be congratulated on his C Stock victory. Driving a Mazda MX-5, DiSimo was the class of the CS field, taking the win by 4.106 seconds over last years Dixie Tour CS winner Clay McCool.As predicted, Jason Collett, of Smyrna, Tenn., was a force to be reckoned with in A Stock. The defending AS National Champion collected his second class victory in-a-row at the Dixie Tour behind the wheel of a Honda S2000. Word is it may have been Colletts last appearance in the S2000 as he has already sold the car to a fellow competitor and is in the process of preparing a Chevrolet Corvette Z06 for A Street Prepared competition.Street Touring® S2 National Champion and defending Dixie winner Mike King, of Jacksonville, Fla., also recorded Dixie victory number two. Kings Bridgestone/FloridaCarsDirect.com Honda CRX Si topped Matthew Glagolas Battleground Motorsports Honda CRX Si by 0.389-second.Robert Carpenter (E Stock), Steven Kornhaus (Street Touring Ultra), Brenda Ucker (C Prepared Ladies), Marko Horn (E Prepared) and Patrick Bullis (C Modified) also went two-for-two at South Georgia Motorsports Park in their respective classes.Reigning F Stock National Champion Sam Strano, of Knoxdale, Pa., hit trouble on Saturday when a sway bar mounting bracket broke on the Strano Performance/Capital Quest Mortgage Ford Mustang he shared with Mike Snyder, of Burtonsville, Md. The pair went in search of an auto parts store and were able to rig up something they hoped would last them at least one run each on Sunday. Not only did the teams handy work hold out for all three runs, but Strano and Snyder finished one-two!Andy Hollis, of Austin, Texas, returned to his winning ways and claimed the Street Touring S Category in an ART/GRM/Soulspeed Honda Civic Si by 1.675 seconds over the UnderDog/Fastech Honda Civic Si of Heyward Wagner.Pace American continues to offer Solo competitors the change to win a new Pace Pursuit® trailer through the Pace Lap Challenge contingency program. At each Tire Rack National Tour stop, the driver with the least run time variance on each course will be entered into a year-end drawing for the $14,000 trailer provided the driver is registered for the program and has not already been named a winner at a previous National Tour event. At the Dixie National Tour, G Stock competitor Per Ezelius was named the Saturday Pace Lap Challenge winner with a time variance of 0.294-second and CS runner-up McCool took the prize on Sunday with a 0.260-second variance in his runs.A longtime supporter of the Tire Rack National Solo Program, Solo Performance Specialties stepped up to become the presenting sponsor of all Tire Rack National Tour awards ceremonies. SPS will provide a variety of prizes from gift certificates to helmets using a Solo or No Solo game show format. Additionally, SPS has created a Top Performer award, and although it was conceived as an award for drivers, at the Dixie Tour, course workers Bill Bounds and Danny Carroll, plus Operating Steward trainee Meredith Najewicz were chosen for the honor.The next Tire Rack National Tour stop is San Diego, Calif., March 15  16, where the parking lots of Qualcomm Stadium will play host. For full results from the Dixie National Tour and information on the upcoming San Diego National Tour, click the Solo tab at the top of the page.