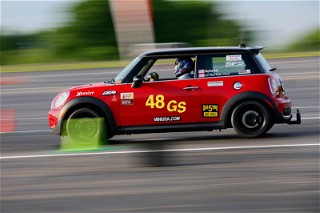 FORT WORTH, Texas (May 7, 2008) - Soloists came from as far west as California, as far east as Florida, as far north as Illinois and Wyoming, and from all points in between. They met in North Texas to battle it out on the Bus Lot at Texas Motor Speedway, where more than 200 drivers gathered for the Tire Rack® Fort Worth National Tour.The largest class was Super Stock with 21 entries. Two Texans battled all weekend for the win, with Austins Lance Adams leading the way on Saturday in his Corvette and Planos David Smart setting the faster times on Sunday in his Sector 111 Motorsports Lotus Elise. But in the end, Adams was able to pull off the win by a scant 0.211-second.By far the closest battle of the weekend was in the all-Mini Cooper S G Stock class with Texas Regions Ken Orgeron taking the first day lead by 0.362-seconds over Red River Regions Jeff Schaadt and the Big 5 Tire/Big Bad Wolf Racing Mini. Schaadt came back on day two to clench the victory by a mere 0.058-second. On the other end of the totem pole, several classes were won by more than three seconds. Steven Pounds took A Stock in a Honda S2000 over fellow Texan Andrew VanderPloeg in the FTW Racing Honda S2000 by 3.021 seconds. Michael Cobb, of Lewisville, Texas, won D Stock in an Inspirus Technology Audi TT by 3.394 seconds over Bob Baileys Dodge SRT-4, and Terry Fair, of Fairview, Texas, ran away with X Prepared in his Chevy V8-powered BMW, beating Fred Langleys Subaru STi by more than six seconds. Driving the JANCO Custom Fab/Montiac Motorsports Pontiac Trans-Am in C Prepared, Planos Kurt Janish finished nearly four seconds in front of Todd Farris, of College Station, Texas, who was driving Alan Bartlings Ford Mustang. Donna Bartling, of Katy, Texas, took C Prepared Ladies by 4.355 seconds in the familys Ferrous Equine. From Tulsa, Okla., Pat Lipsinics HotSubarus.com/Zzyzx Motorsports Subaru Impreza took a 3.838-second Street Modified win over Grady Wood, of Heber Springs, Ark., in a Honda Civic. In E Modified, another Tulsa driver, Douglas Turner, and his Eversharp Tool, Inc. Mazda Miata bested Texan Brian Sullivans Lotus Stalker by 3.176 seconds.In Formula Junior B, young Daniel Seelig, from Edmond, Okla., crushed the competition by nearly 21 seconds in a Max-Torque Margay.Of extra special note in the wide margin of victory category are B Modified and A Modified. Tommy Saunders, of Southlake, Texas, drove the familiar Hoosier TSR LeGrand Dragon to a 4.2-second BM win over Keith Starr, of Iowa Park, Texas, in a Quad Racing Integration Tiga DSR, but was later disqualified, having driven both courses several times during Fridays setup. That gave the win to Starr by 0.194-second over another Texan, Dakota Southerland, in the Hernandez familys Pocket Rocket Form S. Saunders would have set fastest time of the event with a 45.438 on his final Sunday run and an overall fastest time of 92.985.Saunders normal co-driver, Stuart Lumpkin, of McKinney, Texas, ran the Dragon in A Modified trim and took a 5.891-second win over Brianne Corn who also took her turn with the Dragon. It should be noted that both had their fastest times on Sundays second run and Corn was only 0.167-second behind Lumpkin. Hows that for somebody whos used to driving a Mini Cooper S in G Stock Ladies? The performance earned Corn the Solo Performance Specialties Female Outstanding Performer award from event officials. The male counterpart to that award went to Kevin Youngers, who besides serving as Chief Steward, loaned his 2007 Shelby Mustang to multi-time E Street Prepared National Champion Mark Madarash, of Red Oak, Texas, after Madarash blew the transmission in his Trans Am on Sundays first run. Though Madarash had a 1.3-second lead over Dave Whitworth, from St. Louis, Mo., after the first day, he was still able to stay within 0.4-second of the Chevrolet Corvette pilots winning time overall.Special note should also be paid to Barry Booker and Paul Carrig, both from Shreveport, La., who took Carrigs 2004 Volkswagen R32, shod with Dunlop tires, to a first and third-place finish in Street Touring® Xtreme. Booker clinched the overall win with a 2.85-second lead over Houstons Norman Wilhelm in a Texas A&M Sports Car Club Subaru WRX running on Yokohamas. Could there be another street tire battle brewing here?The Pace Lap Challenge Award for the most consistent lap times went to John Hale, of Austin, Texas, on Saturday. Hales Street Touring Ultra times on Saturday behind the wheel of an FTW Racing/RTRT Subaru STi were separated by only 0.292-second. Hale would have taken the honor again on Sunday, but no driver can win twice, therefore Andy Hollis was the second winner of the weekend, turning Street Touring S2 times with only 0.492-second difference in his ART/GRM/Soulspeed Mazda Miata. Both Hale and Hollis are now entered in a drawing to win a new Pace Pursuit® trailer. The winner will be drawn on the final day of qualifying for the 2008 SCCA National Championship Runoffs®.A tip of the ten-gallon hat goes out to all of the Texas Region folks who worked so hard to make the Fort Worth Tour such a successful event, including Greg Piper who designed two fantastic courses. The Saturday night barbecue was a feast to remember, not to mention the SPS Friday night welcome party. That southern hospitality will continue, May 24  25, for the next stop on the Tire Rack Solo National Tour: Atlanta Motor Speedway. To find out more or view full results from the Fort Worth National Tour, click the orange Solo tab at the top of the page.