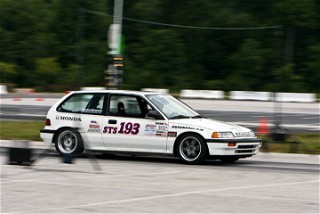 WASHINGTON, D.C. (June 27, 2008) - Andy Hollis, of Austin, Texas, cleaned up at the Tire Rack® SCCA Washington D.C. Pro Solo with wins in the Hawk Super Challenge, Honda Tuner Challenge and a class win in Street Touring® S driving his Soulspeed/ART/GRM/PowerCurveDyno Honda Civic Si. Hollis won STS by 0.249-second over Doug Allen, then beat the Corvette Z06 of A Street Prepared class winner Hector San Nicolas, from Hollywood, Fla., in the final of the Hawk Super Challenge. Finally, Hollis squared off against Street Touring S2 class winner Mike King, of Jacksonville, Fla., in a Bridgestone-Florida Cars Honda CRX to win the Honda Hot Shoe Challenge. In the Ladies Challenge, Ladies 2 winner Diane Johnson, of Glen Allen, Va., prevailed in her Evolution Performance Driving Schools Corvette Z06 in the final round against Ladies 1 winner Karen Kraus, of Harmans, Md., in a Subaru WRX. Before the final, Johnson's husband and Setup TV star, Mike Johnson, got everyone on the grid laughing when he told his wife, "If you don't pass [Karen], you're going home!" Scott Hoffman, of Richmond, Va., who won the Hawk Super Challenge at the 2006 D.C. ProSolo, won the $500 ChaseCam gift certificate in the ChaseCam Bonus Challenge driving an H Stock Maniacal Motorsports Acura RSX. Runner-up Gabe Dunn, of Alexandria, Va., driving Kraus' Subaru WRX, won a $250 ChaseCam gift certificate. The closest class competition came in Super Stock, where less than a tenth of a second separated first and third place. Matthew Braun, of Northville, Mich., picked up nearly a second in his PowerPlug Lotus Elise on the final two runs to leap frog into first place, just 0.010-second ahead of Pat Salerno, from New Milford, Conn., also in an Elise. Salerno's co-driver, Brian Connors, of Philadelphia, Pa., was just 0.079-second behind in third place. D Stock had 18 competitors and was one of the most diverse. James Feinburg, of Cary, N.C., got the class win in his Team Grab & Go Acura Integra Type R, but five different cars finished in the six trophy spots. In addition to Feinburg's Acura, trophies went to a BMW 135, Volkswagen R32, Eagle Talon and two Chrysler Crossfires. In F Stock, Sam Strano, of Knoxdale, Pa., found himself in an unfamiliar position after Saturday  second place and trailing the Autocrossers Inc. Ford Mustang Cobra of Lee Piccione, from Severn, Md. But Strano put it together on Sunday in the Strano Performance Parts/Capital Quest Mustang, and moved ahead of Piccione to take the top spot in class. A Stock had the biggest turnout of the weekend with 24 competitors. Even without the help of Mother Nature, Jonathan Roberts, of Richmond Hill, Ga., showed the beauty of all-wheel drive, as he took the top spot in Donnie Barnes' 2005 Subaru WRX Sti. In E Street Prepared, Brian Burdette, of Sykesville, Md., was at the top of the timesheets the whole weekend in a HorsepowerCarStorage.com Chevrolet Mustang and won the class by a comfortable 0.444-second. Lynne Rothney-Kozlak, of Litchfield, Maine, whose A Stock Porsche broke an axle on Friday, hopped into a familiar car, an IROC Camaro, to run ESP. No, Kozlak didn't bring out the family 1989 IROC Camaro, but borrowed Gary Gurchik's 1991 Camaro. After cone troubles on Saturday, she cleaned things up Sunday to move from sixth to second.Only a week to spare before the next Tire Rack SCCA ProSolo event, July 5  6, at Toledo Express Airport, near the Ohio-Michigan border. For full results from D.C. and information on the Toledo ProSolo, click the orange Solo tab at the top of the page.-30-