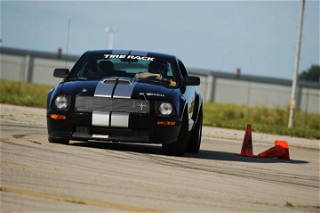 PERU, Ind. (June 30, 2008)  Experience paid off big at the Peru, Ind. stop of The Tire Rack® SCCA Solo National Tour, where the changing weather conditions made each run a new challenge. As a result, some familiar names could be found at the top of the time sheets.One such name was Street Touring® S competitor Andy Hollis, of Austin, Texas, who collected his second STS National Tour win of the year only a week after sweeping the D.C. ProSolo. While the weather at Grissom Aeroplex went from hot and humid to cold and windy throughout the weekend, courtesy of some thunderstorms, Hollis kept all six runs fast and clean. His Soulspeed/ART/GRM/PowerCurveDyno Honda Civic Si outpaced the Bridgestone/Redshift Motorsports Honda Civic Si of Craig Mankewicz, from Milwaukee, Wis., who had a tough start on Saturday with two coned runs in-a-row.Another driver who added some hardware to his rapidly expanding collection was F Stock fixture Sam Strano, of Knoxdale, Pa. Although Lee Piccone, of Severn, Md., did an excellent job in the Autocrossers, Inc., Ford Mustang Shelby Cobra of keeping the pressure on Strano, he was unable to stop Strano from collecting his third FS win of the season in his Strano Performance Parts/Capital Quest Ford Shelby Mustang.Several close finishes came out of the Modified Category, including C Modified where Donald Elzinga, of Waterford, Mich., drove a Reynard FF1600 to a 0.045-second victory over the Pace American Trailers Swift DB-1 of Peter Calhoun, from Westmont, Ill.In E Modified it was the father-son pairing of Jeff and Jacob Christianson, from Mechanicsville, Iowa, who put together a great battle in their shared Westfield SEi. On Sunday, father Jeff clocked the class fastest run of the day in his final attempt, finishing a mere 0.068-second ahead of son Jacob for the win. Another pair of teammates swept the top two spots in Street Modified. Jarrod Hoops, of Midland, Mich., and Andrew Lieber, of Bay City, Mich., shared a Showcase Mitsubishi Evo IX R, with Hoops taking victory by 1.123 seconds.In Stock competition, Wes Jenrich, of Warrenville, Ill., and Scott Bourne, of Georgetown, Ky., had a barn burner in H Stock, with Jenrichs Team Paramount Business Center Consulting MINI Cooper eventually topping Bournes DATS Racing/Kumho Motorsports Honda Civic EX by a slim 0.046-second.Steve Wynveen, of Germantown, Wis., earned his second Super Stock win of the year, using a Mercuryracing.com Chevrolet Corvette to beat Matthew Braun, of Northville, Mich., in a Lotus Elise by 0.985-second. E Street Prepared wasnt quite as close. After a rough start on Saturday, Jennifer Merideth, of Westland, Mich., quickly bounced back, setting a blistering time of 51.303 on her final run of the day in a Ford Mustang, nearly a second faster than any other ESP competitor that day. It gave Merideth a nice cushion for Sundays runs, helping her score a 1.593-second victory over second place David Feighner, of Howell, Mich., in a Lees Automotive V8 Division Ford Mustang.For his outstanding consistency on Saturday, Hollis was awarded the Pace Hot Pursuit Award, his three runs separated by only 0.113-second. On Sunday, the award went to B Stock winner Chris Harvey, of Osceola, Ind., who had 0.456-second variance in his runs behind the wheel of his Tire Rack Mazda RX-8. Such consistency out of Hollis and Harvey is especially commendable considering the ever-changing weather conditions throughout the event. Both drivers are now entered in a year-end drawing to win a new Pace Pursuit® trailer.The Indy Regions preparation for the Peru National Tour was superb by all accounts and helped the event run quickly and smoothly. In recognition of such, the Solo Performance Specialties Top Performer Awards went to John Wilmoth, who helped set up and took more than 4600 photos during the event, and D Modified winner Steve Brinkerhoff, who was also on hand to set up and continued to work hard throughout the weekend.The next stop on the 2008 Tire Rack SCCA Solo National Tour will be Miller Park, where the Milwaukee National Tour is scheduled for July 19  20. For full results from the Peru National Tour and additional information about upcoming Solo events, click the orange Solo tab at the top of the page.-30-