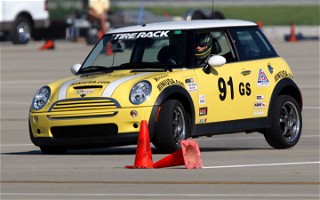 TOLEDO, Ohio (July 7, 2008)  Close finishes and come-from-behind victories were the order of the day at the Tire Rack® SCCA Toledo ProSolo, including the Hawk Super Challenge, where 31st qualifier Billy Brooks collected the coveted win. Making the trek to Toledo from Park City, Utah, Brooks finished second in Street Touring X behind the wheel of a Team ARG/Crazy Monkey Racing Subaru Impreza WRX. Brooks was 0.159-second behind the Cobb Tuning Subaru WRX of Toledo driver Greg McCance. A testament to the close competition all weekend, this put Brooks in the 31st qualifier spot for the Hawk Super Challenge (the cut-off for the Hawk Super Challenge was a slim 0.17-second).Making his way through the Hawk Super Challenge bracket with style, Brooks took on Street Touring® S2 winner Michael Snyder, of Elizabethtown, Pa., in the final elimination without error. While Snyders Koni/SSC Honda CRX Si, which he shared with Ian Baker, fell to Brooks Subaru in the Hawk Super Challenge, Snyder did walk away with the Honda Tuner Challenge award for being the highest Honda qualifier (ninth). When Snyder was pitted against Street Touring S winner Andy Hollis, of Austin, Texas, for the Honda Hot Shoe contest, the bonus cash went to Hollis and his trusty SoulSpeed/ART/GRM/PowerCurveDyno Honda Civic Si.A Snyder did walk away with a Challenge win however, Michaels wife, Carrie, won the Ladies Challenge. After finishing second to Christina Peterson, of Hillsborough, N.C., in the Ladies 1 category, Carrie made it to the final round of the Ladies Challenge where she piloted a Toyota MR2 to victory over the Ford Mustang of Jennifer Merideth, from Westland, Mich.In the ChaseCam Bonus Challenge, it was STS2 competitor Geoffrey Chambers, of Fishers, Ind., whos Aim Tuning/Roadrace-Autox.com Mazda Miata topped the Hollis Honda Civic in the hands of Andys wife Ann. The surface of the Toledo Express Airport lent itself well to close finishes and late charges as the grip increased with each session, making fast and clean runs on Sunday morning a key to victory. A prime example was the A Stock class. Shortly after Jonathan Roberts, of Richmond Hill, Ga., took over the top spot from day-one leader Chris Carris, of Hopewell Junction, N.Y., both Subaru STi pilots were leapfrogged by John Vitamvas. The 4Struts/OpenDiffRacing Porsche Boxter S pilot from Columbia, Md., used his final two runs to edge Roberts by 0.190-second.Robert Carpenter, of Knoxville, Tenn., sat fourth in E Stock at the end of Saturdays runs, but mounted a tremendous comeback in the Team Underdog Toyota MR-2. Carpenter nabbed the win from his own co-driver, Mark McCrary, of Bristol, Tenn., by 0.163-second.One of the closest finishes of the event was also a poignant one. In D Stock, Erik Strelneiks, of Cedar Park, Texas, was locked in a tight battle with Trevor Hill, of Greensburg, Pa. Competing in the newly-classed Jungle Cat Racing/Hoosier/7Parts BMW 135i, Strelnieks topped Hills HRERacing Volkswagen R32 by a mere 0.021-second to give the BMW 135i its first National win.There was no closer finish than G Stock, because how can you get any closer than a tie? Rookie Kevin Royce, of Lake Orion, Mich., and Tony Savini, of Cochranville, Pa., both in Mini Coopers, completed their runs in a dead heat. Per Solo rules, the timing system deferred to the drivers second-fastest run times, giving the win to Royce.While she missed out on the Ladies Challenge win, Merideth was clearly unaware of the close-call theme of the event, as she stormed to the Ladies 2 class victory by more than 1.5 seconds in her Mustang. Merideth was so quick, her husband and E Street Prepared winner Marcus Merideth, had to run off of her time in the Hawk Super Challenge!On the lighter side of things, Michael Johnson, of Glen Allen, Va., borrowed a Chevrolet Corvette Z06 from Rod McGeorge on Sunday morning after his own Evolution Performance Driving Schools Corvette encountered brake problems. After scoring the A Street Prepared win, Johnson moved onto the Hawk Super Challenge, where as luck would have it, he was scheduled to run against the cars other driver, Street Modified 2 driver Courtney Cormier, also from Glen Allen. After completing his own set of runs, Cormier handed the car over to Johnson, grabbed his helmet and took his position on the start line, making vroom vroom noises as Johnson blasted away from the lights. The crowd ate it up.The month of July still holds one more Tire Rack SCCA ProSolo event; July 26  27, the Seneca Army Depot in upstate New York will host the Finger Lakes ProSolo. Full results from the Toledo ProSolo and more information about the Finger Lakes ProSolo, as well as other Solo events, click the orange Solo tab at the top of the page.