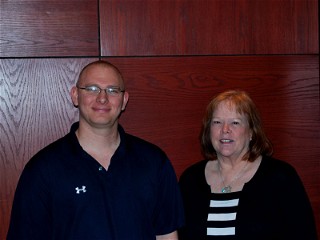 TOPEKA, Kan. (January 16, 2012) – With an eye on program development, enhanced customer service, and improved operational effectiveness, the Sports Car Club of America today announced a reorganization of the Rally/Solo department in the national office.

Still headed by Howard Duncan, SCCA Vice President of Rally, Solo, and Special Programs, the reorganization features a number of faces familiar to both programs with changes in responsibilities.

Deena Rowland has been promoted to Rally/Solo Administrative Coordinator. Rowland’s duties will expand from her role as Solo Administrative Specialist, to include being the primary liaison to the RoadRally Board and community, additional budget support duties, increased support role for the Tire Rack National Solo program, and taking a greater role in the RallyCross and Solo National Championship events. Rowland has been at SCCA since the move to Topeka in late 2002.

Brian Harmer joins the Rally and Solo department after working for four years in the SCCA Technical Services department, concentrating on vehicle compliance for Solo events. In the new role, Harmer will be the primary liaison to the Solo Events Board and the RallyCross Board, provide assistance in developing programs to help the Regions grow participation, oversee safety programs, provide assistance for the Tire Rack National Solo program, serve as the project leader for the RallyCross and Solo National Championships, and assist with administrative matters such as budget development and monitoring.

Sandi Brown will continue as an independent contractor, expanding her existing role of administration chief of the National Solo program to become the National Solo Operations Manager. Brown will tap into her years of experience and contacts within the SCCA community to provide enhanced coordination with the host Regions for events on the Tire Rack National Solo calendar and to better serve participants by managing the on-line registration for these events. Brown will also have a role in the RallyCross National Championship.

In addition to the changes on the staff, Heyward Wagner will continue in an independent contractor role as the Solo Communications Manager, including responsibility for the program’s e-newsletter, SoloMatters.

“Despite the challenges that face the SCCA and our department, I feel more energized, optimistic, and confident than I have in years,” Duncan said. “These changes have been made with an eye on improving both the Solo and Rally programs, not only at the national level with our larger events, but especially at the regional level. Please join me in congratulating these folks and wishing them well in these roles.”

More information on the SCCA and its Solo and Rally programs is available at www.scca.com.