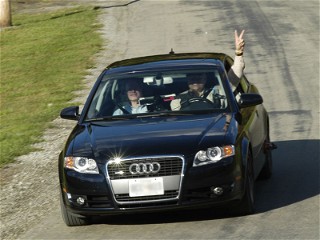 The top Road Rally awards were misidentified on SCCA.com in the days following the National Convention. The National Tour Rally of the year was awarded to the Land O’Lakes Region for the Badger Trails Rally, led by John A. Emmons. The Arthur J. Gervais Award for National Course Rally of the year was hosted by the Steel Cities Region for Steel Haul, led by Chuck Larouere. The awards were reversed in the original announcement.

The Indianapolis Region is hosting The National Road and International Road SCCA National Road Rallies June 23 - 24, 2012. Contestants will have their choice of entering each event as a tour, course or GTA National event or Great Lakes Divisional event. The starting location will be near Exit 41 of I-70 in Cloverdale, Indiana. The rally incorporates historic Route 40.

Additional information and an event flyer and entry form can be obtained from www.indyscca.org.

The Washington DC Region SCCA, in conjunction with the Branded Rally Club of Maryland, is bringing back the double National RoadRally weekend on Columbus Day weekend in 2012, October 6 and 7.

Saturday will feature Eric Bloom's award-winning Catoctin Monte. This event is a Monte Carlo style event, which means that teams are given the mileage for every turn and all possible controls, and the perfect Car 0 time to reach that control. Scores are generally low, as no calculations are required! The national event is approximately 200 miles in length, starting at the HQ Hotel (see below) in Frederick, MD at approximately 8 a.m.

Sunday will feature the fourth running of two-time Gervais winning Lobster Traps Course Rally and the first Lobster Traps GTA Rally presented by Chris Bean and Steve Gaddy. This event will again feature a variety of basic and challenging traps along the approximately 200 mile route. Lobster Traps will also start at the HQ Hotel around 8am and finish in Mount Airy (15 minutes east of Frederick) around 5pm.

Additional information and an event flyer and entry form can be obtained here.