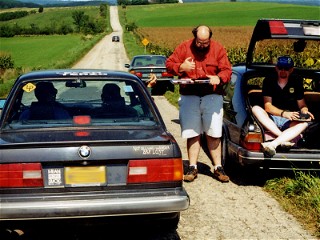 2012 marks the 63rd Anniversary (64th running) of the Detroit Region Sports Car Club of America (SCCA) Press On Regardless Rally® (POR), the oldest continuously run rally in North America. More than twenty teams of drivers and their navigators will compete over 525 miles of mostly unpaved roads near Indian River, Michigan during the two-day event September 7-8, 2012. This TSD (Time-Speed-Distance) rally is NOT a race, but rather a competition involving precision driving and teamwork between a driver and a navigator.

Press On Regardless first ran in 1949, with entries including an SS100 Jaguar and a 1936 Duesenberg. That first POR started in Dearborn, and took competitors to Battle Creek and Flint before returning to the start. The first winners drove a 1949 Studebaker. Since that first presentation, POR has been a unique event, going from an SCCA-sanctioned National Rally, to a “brisk” 24 hour Time-Speed-Distance event and then to a closed road performance event patterned after the European Championship rallies. After several years as a FIA listed event, it became the first World Rally Championship Rally in the United States in 1972. When SCCA initiated the Pro Rally series, POR joined that series and was generally considered not only the oldest but also the longest, toughest and meanest event on the schedule. Finally, in 1994, the Detroit Region decided to return the event closer to its roots, and it once again became a TSD event.

The challenge of a TSD rally, such as POR, is to follow a set of route instructions, which describe both the route to be followed, and the speed at which the car should be traveling. Periodically, competitors encounter checkpoints – unknown to them – where the rally car is timed precisely. The difference between the actual time the car arrives and the time the car should arrive, based on the route instructions, becomes the competitor’s score. A perfect score is zero, indicating the car arrived exactly on time. Cars are penalized for each hundredth of a minute they arrive early or late. The 64th running of POR will award points for the SCCA Detroit Region, Great Lakes Division, and National Tour Rally Championship, and the overall winner’s names will be added to the “GENE HENDERSON MEMORIAL TROPHY” along with all of the past winners since 1949. Get more information on the Press on Regardless Rally here.