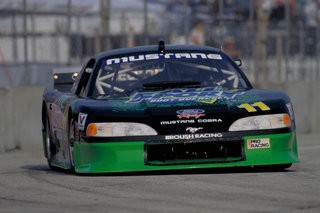 TOPEKA, Kan. (Jan. 23, 2015) – Tommy Kendall, a multiple-time Sports Car Club of America Trans Am series Champion, has been announced as part of the 2015 class of inductees to the Motorsports Hall of Fame of America. Kendall, and his six fellow inductees will be formally honored at during a ceremony scheduled for June 18, at the Fillmore Theater in Detroit.

Starting in 1995, Kendall won the Trans Am series title in three consecutive seasons. In those seasons, Kendall piloted his Jack Roush Racing Ford Mustang to a total of 16 wins, and 27 podium finishes, in 38 races. Kendall also has experience in many other forms of racing, including multiple starts in NASCAR Sprint Cup competition and two starts in the 24 Hours of LeMans.

“A lot of the names on this year’s hall of fame are heroes of mine,” Kendall said. “[Being on the same list] doesn’t really compute. I’ve been lucky to have good things happen during my career. To be mentioned with names like that … at the end of the day it’s nice to be recognized for the work you did.”

Ricky Carmichael, Walker Evans, Warren Johnson, Mark Martin, Duke Nolan and Lloyd Ruby round out the remainder of the 2015 Hall of Fame inductees who were announced at Daytona International Speedway, as part of the Rolex 24 at Daytona.

Additional information on the Motorsports Hall of Fame of America can be found at http://www.mshf.com/.