SCCA Drivers Leading Charge After Six of 24 Hours In Daytona 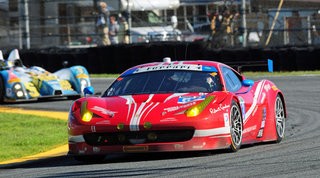 DAYTONA BEACH, Fla. (January 24, 2015) - Sports Car Club of America members, champions and racers have represented well for the opening six hours of the 2015 Rolex 24 at Daytona, though at 8:00 p.m. EST on Saturday night the race was only a quarter of the way finished. Three of the five IMSA classes contesting the race are being led by SCCA members at the quarter distance at Daytona International Speedway.

In the overall lead is the familiar No. 01 Ford EcoBoos/Target Riley/Ford from Chip Ganassi Racing (himself a Runoffs podium finisher as a driver), led by four-time Rolex 24 winner and two-time Trans Am Series Champion Scott Pruett.

Anthony Lazzaro, the 1993 Formula F gold medalist at the SCCA National Championship Runoffs®, led his entire stint in the No. 63 Robert Graham/Royal Purple Ferrari 458 Italia. Lazzaro had enough cushion to pit and pass the car to teammate Jeff Segal while keeping the lead in the GTD class.

Just after 8:00, however, following a full course caution and ensuing restart, the No. 93 TI Automotive Dodge Viper SRT moved to the GTD lead with a pair of SCCA members behind the wheel. Defending Trans Am 2 winner Cameron Lawrence and multi-time Pirelli World Challenge race winner Kuno Wittmer and teammates were forced to start from the rear of the field, with Wittmer in control to start the second quarter of the twice-around-the-clock race.

With a full lap on nearly all of their class competition, Pirelli World Challenge race winner Mark Wilkins has his Prototype Challenge No. 54 Composite Resources/Flex Box ORECA FLM09/Chevrolet up front as well as the race charges into the night period.

Making the highlight reel early in the night is former SCCA SafeRacer Club Racing program racer and 2005 SCCA Pro Racing Battery Tender Mazda MX-5 Cup champion Tom Long, who scored a couple of firsts for SCCA Official Car Mazda in the Rolex 24 at Daytona. Long drove the No. 70 Mazda/Castrol/ModSpace Mazda SKYACTIV-D Prototype to the overall lead, becoming the first Mazda and the first diesel-powered car to lead overall in the 24 hour race in the 53-year history of the event.

In addition to the on-track action, each of the corners at the 3.56-mile circuit are covered by SCCA flagging and communication crews led by the Central Florida Region with workers from across the country.

The race continues until 2:10 p.m. on Sunday at the site of the 2015 SCCA National Championship Runoffs.