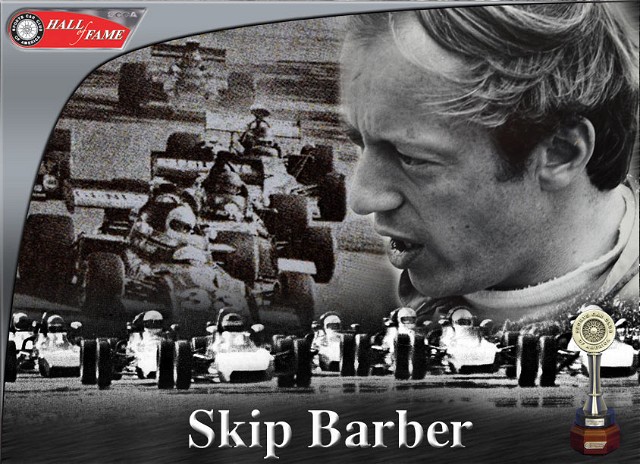 Skip Barber was born in Philadelphia in 1936 in an era of fancy sportscars driving around town.  As a kid, watching the parade was an inspiration.  Skip was  fairly shy, quiet kid with an absolute passion for cars.  He started driving at the age of 10 and put thousands of miles on the family car in the alley behind their house.  Half of those miles were in reverse as there wasn’t room to turn around.  Skip attended Harvard on a scholarship.  He would have been an English major had he gone to class…but the cars won out.  He spent every minute and every dime on cars.  He joined the Merchant Marines out of college and was introduced to racing in 1958.  The first race he ever saw was the first one he was in and he lapped the field thus beginning his relationship with Lime Rock.  The biggest detriment to his racing career was that he was shy.  Networking and getting rides was difficult.  In 1970 he won Formula Ford earning him the President’s Cup that year.  He set 32 different lap records.  Racing was chasing sponsors and working at car dealerships.  It was his belief that auto racing was coachable like any other sport which lead him to teaching.  Coaching and inspiring at the first racing school in 1975 with 4 students.  He financed the effort with a loan from the bank for “remodeling his bathroom”.  The school formerly took his name the next year.  We can learn about branding from Skip Barber.  He has trained more motorsports winners and champions than any other organization of its kind.  Since 1983, the school has trained over one-third of all Indy 500 competitors and one-quarter of the Nascar Sprint Cup competitors.  The key is where did professional race drivers send their kids to racing school?  The celebrities?  They all went to Skip’s school.  Barber is one of a select few Americans to compete in a Formula 1 World Championship.  He is linked inextricably to Lime Rock Park.  He has been a member of this organization for over 54 years, mostly as a member of the Mohawk Hudson Region.  He’s also served as President of the Road Racing Drivers Club.  He created an arena of racing where it’s about the driving and not the car, which is a huge change of what it had been before.  In many respects, he is the father of spec racing.  We honor him and thank him for what he’s done for the SCCA.