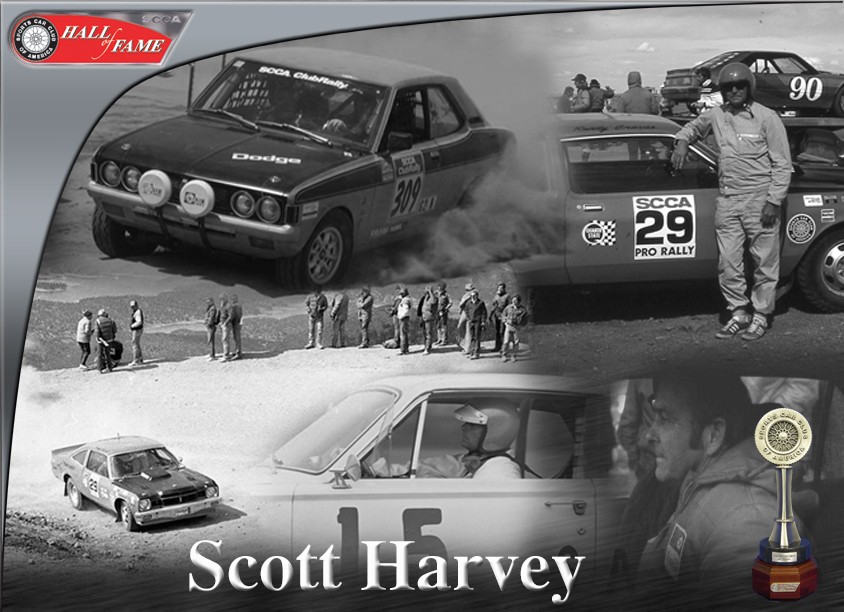 Longtime SCCA member Scott Harvey is known to many as simply, “Mr. Rally.”

After serving in the Navy, during the Korean War, Mr. Harvey earned an engineering degree from UCLA.  He then moved to the Detroit area and went to work for Chrysler. Already an SCCA member, Mr. Harvey convinced Chrysler to loan him a 300D to rally.

He developed the Plymouth Valiant and then the Barracuda with disc brakes and V-8 engines. Mr. Harvey found success in road racing, and his Team Starfish finished second in the 1966 Trans-Am Championship with the aforementioned Barracuda.  The knowledge he and his team gained through SCCA activities made possible the development and availability of (Mopar) performance parts through Chrysler dealerships.

But he really became known for his influence on the world of Rally.

Chrysler backed a three-car team of Plymouth Valiants for a trip to the Monte Carlo Rallye in January 1964.  One of the three teams paired Mr. Harvey with fellow SCCA Hall of Famer Gene Henderson.

Originally a Time-Speed-Distance participant, Mr. Harvey’s love quickly became performance rally. In 1968, he earned the biggest win of his career at the FIA Shell 4000 Trans-Canada Rally. Working with Henderson, Mr. Harvey brought European Style rally to the Detroit area and created the MONY Rally series across Michigan, Ohio and New York. That led to the creation of SCCA Pro Rally in 1973. Of course, Mr. Harvey became SCCA’s first Pro Rally champion with co-driver, and fellow Hall of Famer, Wayne Zitkus.

Mr. Harvey was a true pioneer in the United States Rally world. Hall of Famer John Buffum was quoted calling Harvey and Henderson the “Lewis and Clark of American Rally.”