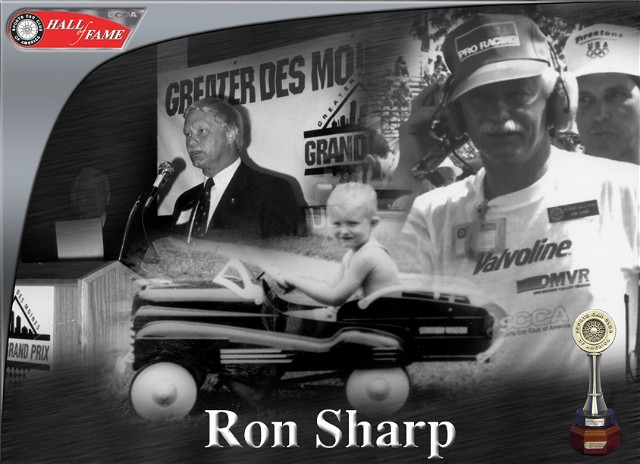 Ron Sharp has been a fixture behind the scenes at successful events for 30 years. In 1988, promoters of the a new downtown street race in Des Moines, Iowa, turned to Ron as Regional Executive to serve as race chair for an event with many questions and fewer answers, despite the fact that the Des Moines Valley Region had just two licensed race workers in the Region at the time. Calling on friends and fellow members from MiDiv and CenDiv, Ron staffed a very successful event headlined by SCCA Trans-Am. In 1993, Ron stared down an unprecedented challenge with that event. A 500 year flood occurred during the Grand Prix event, causing cancellation of the final day. Ron organized workers, drivers and crews to help with sandbagging parts of Des Moines, proving SCCA Cares as they literally held back the waters of the Mississippi. By 1994, Ron had moved on to Chair of the SCCA National Championship Runoffs, taking on yet another challenge as the event moved from its long-time home at Road Atlanta to Mid-Ohio Sports Car Course. That earned him the John McGill award for significant contribution to the Club Racing Program. Ron’s skill set may have taken him to other racing organizations, but he was never far from his SCCA friends and family. In 2007, he was awarded the Woolf Barnato award, presented to the member who has made the most outstanding long-term contribution.