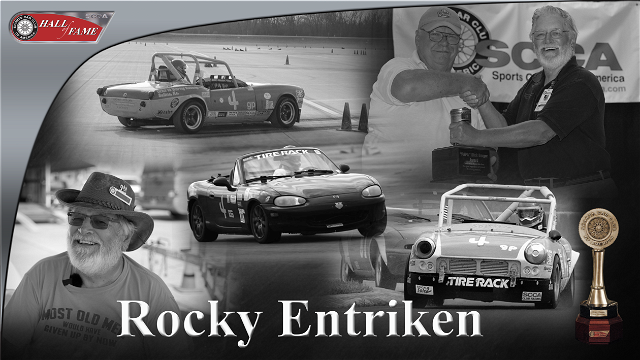 Robert “Rocky” Entriken Jr. has been a force of nature for the SCCA since the early 1970s.

Rocky’s SCCA career began before he was officially a member. He was made an honorary member of the Kansas Region in 1969, and officially joined the Club two years later. He immediately became involved in his Region’s planning, serving as the Regional Executive in 1974.

As the event has grown, so have his duties, which now includes a team of more than two dozen writers each year. His Solo Stats book, compiled annually, features the driving record of every driver who has ever participated at the Solo Nationals and is considered the bible of Solo Nationals statistics.

In 1976, Rocky became a member of the Wichita Region and was one of the founding members of the Salina Region in 1990.

Behind the wheel, Rocky continues to compete in the 1964 Triumph Spitfire that he purchased from an SCCA member in 1966. In his career, he has won the Solo Cup, the Vern Jacques Award for contributions to SportsCar magazine, a Solo 1 National Championship, and multiple Midwest Division Solo Championships.

In 2016, Rocky was honored with the Dick Berger Perseverance Award, presented in his case for his continued support of the Solo National Championships. He was also the first recipient of the Dave and Jo Richards Award, established in 2019 as Salina Region’s highest honor.

Rocky was inducted into the SCCA Hall of Fame in 2023.