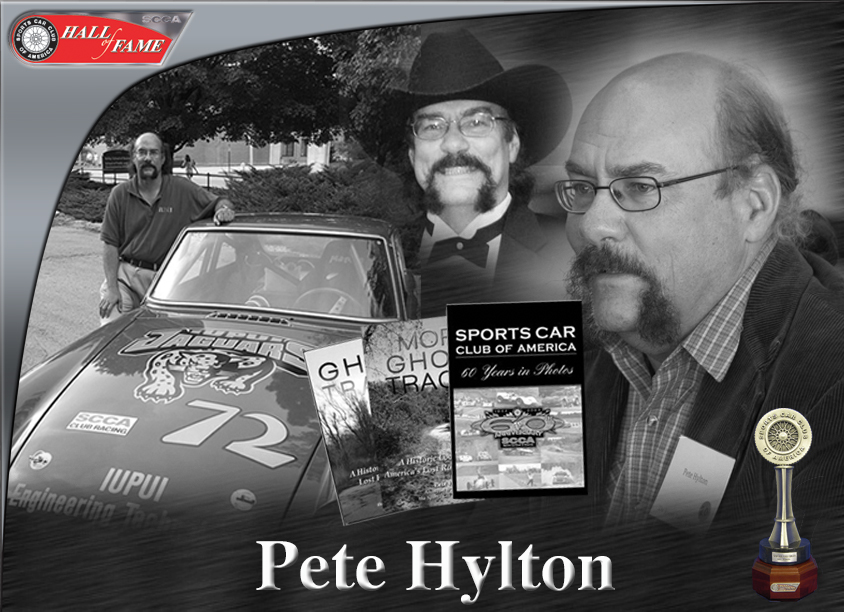 As we acknowledge and welcome our final inductee this evening, we go back to where we started with our first inductee, and we will talk about service. We have also talked about champions, but there are different kinds of champions. And along with his phenomenal record of service to our club, Pete Hylton is indeed a champion, but one of a very special nature.

As I continue with Pete’s introduction, one that to many of you it is likely wholly unnecessary, I must admit that within the text of what I am saying I have liberally borrowed from the letter of nomination put forth by our own Howard Duncan, as it is rich in substance and context.

As I said, Pete’s service to the club has been exceptional, spanning back to his becoming a member in 1975. In that time he has served as a multi-term member of the Board of Directors, as the Club’s treasurer during some challenging times, and filling about every role that could be imagined for his beloved Indy Region.

He is also one of the founders of this very SCCA Hall of Fame, has been a Hall of Fame presenter, and has often served as a traveling MC for Regions/Division meetings. And thru it all he has taken time to enjoy the Club as well through racing and rallying.

An area of his service that has gone to another level, however, is his beloved role as Archivist and as the Club Historian. This Mechanical Engineer and Doctorate of Education, who suffers from the sickness perhaps unique to the SCCA of being a compulsive collector/repairer of MGs, has combined those skills as the SCCA Archivist for nearly 20 years, and has simply redefined that position. He has accurately, compellingly, and humorously documented our Club history through numerous magazine articles, and he has published 4 books on SCCA’s history: Ghost Tracks, More Ghost Tracks, The Gentlemen's Club, and SCCA - 60 Years in Pictures, and many of you own them all I’m sure.

And still, we have not yet reached what could truly be his greatest service to our club. While Pete might be most remembered for his work through his writings, it’s his work with college students in introducing them to the wonders of motorsports that might well be his greatest contribution to the Club, and it’s future. Pete created a Motorsports Engineering program at his university, and with the best possible mentor, these young students have not only learned of SCCA and its place in the world of motorsports, but as a result of Pete’s efforts will have a high probability of being contributing members for years to come.

Yes, Pete Hylton is indeed a champion, but not of an individual SCCA class or event, but of the very club itself.

To complete our induction of this very special class, and this special individual, to the SCCA Hall of Fame, I could find no words more fitting, more perfect, than those with which Howard closed his nomination:

“It is my honor to emphatically request that Pete Hylton be inducted into the SCCA Hall of Fame, before he begins his third career as a writer/lecturer and leaves these shores, in recognition of his significant impact on the SCCA over many years and into the future. Few have deserved this more.”