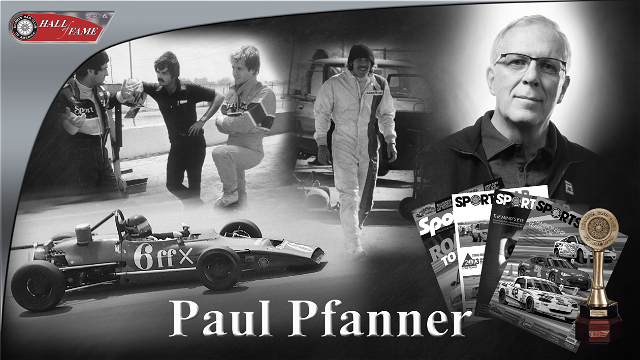 Though the teenage version of Paul Pfanner hoped otherwise, his lifelong contribution to the SCCA and motorsports was destined to be as its greatest cheerleader and premier news source.

Pfanner first fell fully in love with the sport in 1969 at an SCCA Trans Am race at Riverside, where whether or not he paid for his admission ticket remains a legend. By 1973, he was an SCCA member working with local race shops on graphic design.

His love of Formula car racing led to the formation of FORMULA Magazine, alongside a Formula Ford race car, in his southern California garage. Eventually, he found himself working on SportsCar magazine, first as the art director in 1978 and then as the editor in 1979. In 1980, he started a publishing company, publishing Cal Club’s Finish Line magazine.

In 1984, Pfanner’s company earned the contract to publish SportsCar Magazine. Over the next 38 years, SportsCar Magazine has been SCCA’s premier marketing piece, arriving at homes on schedule with news and features on SCCA members across the country. The magazine has evolved with the times, stripping away dated information like race results that can be accessed online and telling the stories of the people who make up the Club.

Over the period that Pfanner’s company has published SportsCar, the Club has grown for 20,000 members to 65,000-plus, and the magazine has been a significant contributer to that growth.

When Pfanner began RACER Magazine in 1994, SCCA was prominently featured from the start. The first issue featured coverage of SCCA Pro Racing and PRO Rally, and that continues today – on RACER Dot Com, the premier motorsports website for racing news, SCCA news is featured prominently amongst NASCAR, IMSA and Formula One.

For over 40 years, Paul has brought exposure, enthusiasm, and expertise to SCCA in an area that many had overlooked. His chosen niche in the Club has expanded its image, grown its membership and enhanced the member experience for all and deserves this recognition.

While a young Paul Pfanner may not have realized his dreams of becoming the champion racing driver of California, he did become a champion promotor of the SCCA and motorsports.