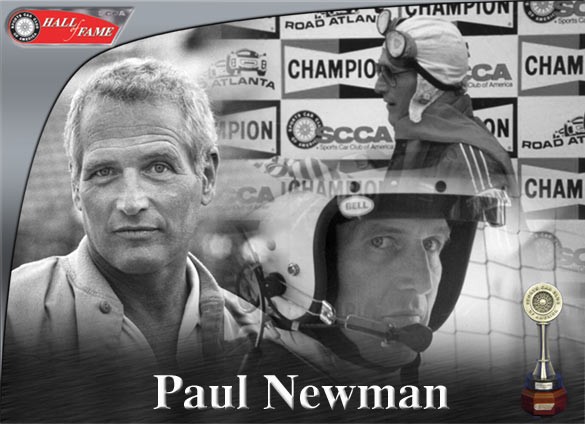 Paul Newman was a man known for many activities in a life that has been marked by success in numerous arenas. The SCCA Hall of Fame honors him for his participation in racing, not only for his success as a four time national champion, championship car owner, and recipient of the President’s Cup, but also for the manner in which he attained that success. While special attention and concession could easily have been sought during Newman’s many years of SCCA participation, ……none ever was. It is truly unique when a man of such notoriety chooses not to “stand out,” but instead, to “blend in” with the average member. My favorite story of how Paul preferred to blend in occurred when he walked up to journalist Robin Miller at Sebring one time wearing a McDonalds T-shirt, an old ball cap, white pants, and loafers, and suggested the two go to lunch at a little joint in town. When Miller walked up to the cashier to pay, the waitress whispered to him, “is that Paul Newman?” Miller replied, “hell, no he’s just one of the painters working at Sebring, he just looks like Newman.” In the parking lot, Miller related this story to Newman, who laughed all the way back to the track. He didn’t want to be Paul Newman at the racetrack, he just wanted to be part of the racing family. That, even more than his many competition successes, is what made him unusual, even in such a club of unusual personalities. For the quiet manner in which he chose to become a member of SCCA, to the confident skill he showed behind wheel, to the image of a modern gentleman racer that he portrayed, the SCCA Hall of Fame salutes Paul Newman.