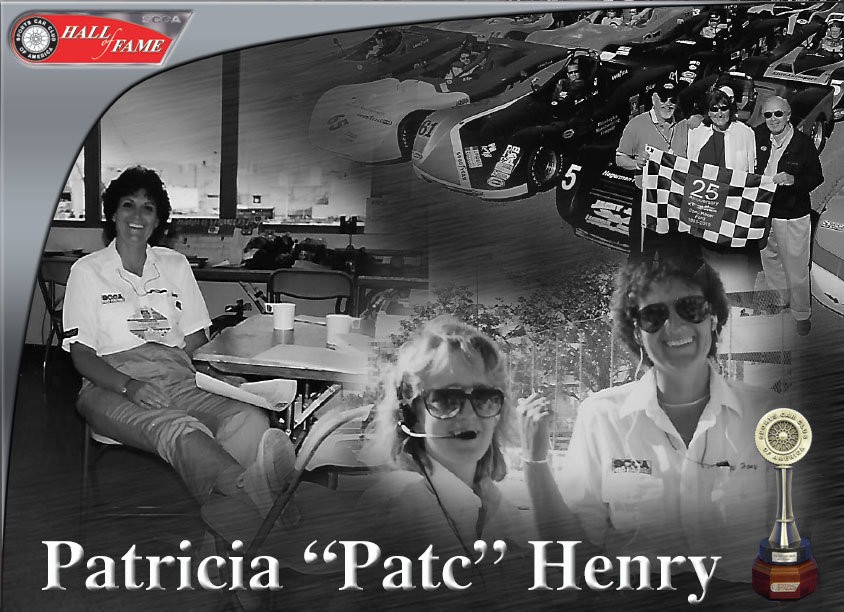 PatC Henry’s SCCA Hall of Fame career began with a free membership from a car dealer. When PatC purchased her brand new 1964 Sprite, she was granted an SCCA membership and met at pick up by Ralph Barbe, then the Nebraska Region RE. Armed with her new membership, PatC entered a Road Rally event, finished fourth, and was hooked. Throwing herself into the Club, PatC became the Region’s first female RE in 1970. Along the way, she participated in Rally, as crew for road racing, in autocross, and more. She even picked up her unique spelling in the SCCA, when Patt Buell ran out of room on a banner for her traditional spelling, the “ess-why” was dropped for just a C – and this being the SCCA, of course it stuck!

Her work with the Nebraska Region was noticed; in 1984, she was tabbed by the National Office as the Series Manager for Sports Renault and tasked with leading the new pro series. Her work with Sports Renault, the Playboy Endurance Series, Corvette Challenge, Neon Cup and more stabilized SCCA’s pro racing division and helped to launch the careers of hundreds of professional racers. At a brainstorming session for the next evolution of production car racing, it was PatC who suggested the name “World Challenge.” During her time in pro racing, she was also able to help Enterprises turn a profit – and in doing so, infamously proved to Pete Hylton that “pigs could fly.”

Established as a stalwart of the national sports car racing scene, PatC’s love for Club Racing - and a not so gentle nudge by Nick Craw – brought her back across the building as the head of Club Racing. In addition to PatC’s regular duties, that left her in charge of a monumental task – moving the Runoffs from its established location at Road Atlanta to Mid-Ohio. While that may seem commonplace in today’s world, it was an unprecedented SCCA move at the time, and came with the fears and worries that often accompany such a shake up in the Club. History proves the move and the transition was a successful one. The Runoffs thrived at Mid-Ohio, with car counts higher than they’d ever been on a yearly basis. PatC and her staff left the Runoffs in stable hands for the next generation of leaders.

Bitten by the bug more than 50 years ago, PatC remained in the motorsports world after her first retirement from SCCA when the Club moved its headquarters to Topeka. When fellow Hall of Famer Nick Craw called once again, PatC moved side by side with him to ACCUS – this time, helping Craw oversee all of US motorsport’s connection with the FiA.