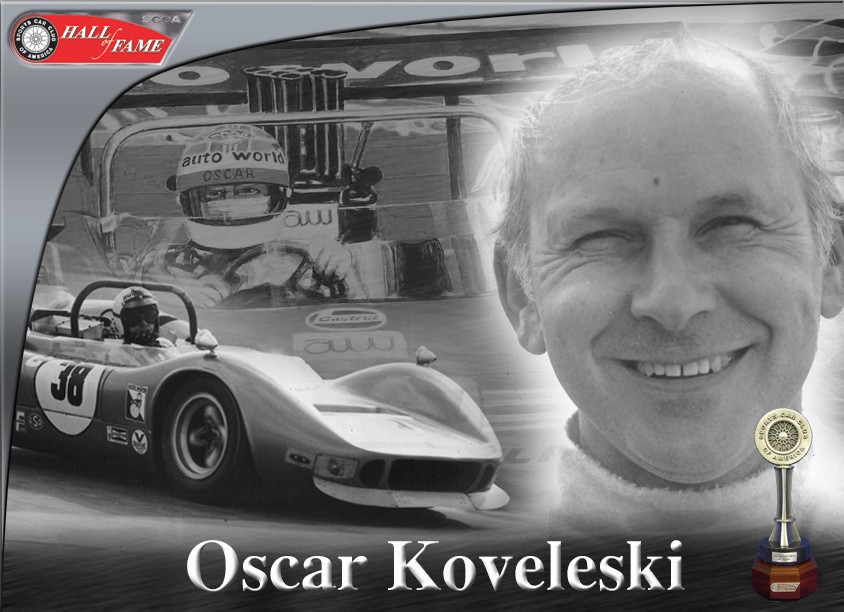 Oscar Koveleski can be accurately described with two words – speed, and passion. His love of speed started early. As a youngster, Oscar had a passion for model cars and airplanes. He learned to fly at age 9, and at 18 he joined the Philadelphia Region of the SCCA. His first win came in a 1951 SCCA Regional race at Bone Stadium in Pittston, Pennsylvania. He raced regularly through the 50s and 60s in SCCA Regional and National Races, as well as the 12 hours of Sebring and the 24 hours of Daytona. In 1970, he won the ASR National Championship at Road Atlanta, beating 27-time National Champion Jerry Hansen by just one-tenth of a second. From 1969 through 1972, Oscar was a regular competitor in SCCA Can-Am action, with his orange “Car 54” one of the most recognized cars in the series.

Looking for a way to contribute to better safety for drivers, he joined the board of directors of the Motor Racing Safety Society. Oscar served on the Board of Directors for the SCCA, and promoted SCCA races at Pocono Raceway from 1980 to 1996.Oscar introduced a countless number of children to racing, both in person and through his Auto World mail order catalog that sold model and slot cars beginning in 1958. Oscar contributed to a love of cars and racing early in a child’s life, and many future racers got their start at home thanks to his Auto World catalog.