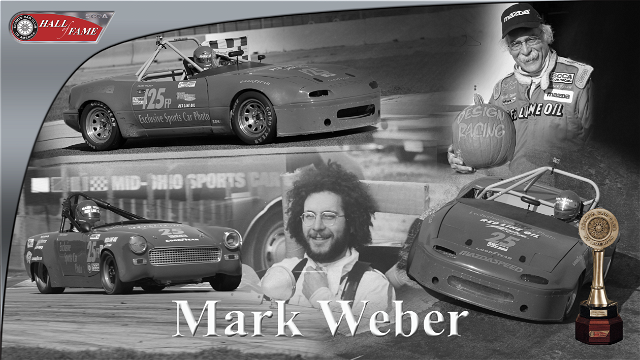 One of the most recognized photographers in the Club, Mark sold his first photo shortly after becoming an SCCA member as a high school student in 1970. That single photograph began a hall of fame career as a significant recorder of SCCA history, taking hundreds of thousands of photos of race cars through the years.

First sticking near his St. Louis home, Weber eventually became the official SCCA photographer for Trans-Am, World Challenge, the SCCA Runoffs and more, expanding his reach to various manufacturers and magazines along the way. His work has appeared in SportsCar Magazine, RACER, AutoWeek, Car and Driver, and more, and likely hundreds of Mark Weber photos hang on walls and in garages across the country.

Following the 2020 Runoffs, Mark infamously sold off his camera equipment and retired from taking photographs in a career that spanned exactly 50 years.

While that alone likely qualifies Mark as an SCCA Hall of Famer, it’s only half of his story.

He attended his SCCA driver’s school in 1974, and has raced continuously since then without even a single year off.

First known or his Austin-Healey Sprites in the 1970s, he became a fixture of the Production category, first  in F Production and G Production, often in the same car with an engine swap and weight adjustment. Those “little British cars” gave way to a Mazda Miata in 2010, though his multiple entries continued with E Production in addition to his F Production focus. Over the years as the rules evolved, Weber competed in E, F, G and H Production. In all, Weber has entered more than 600 Regional, Divisional, and National SCCA Races in his career.

He began a rise to National prominence with his first entry at the SCCA Runoffs in 1982 at Road Atlanta. It was impossible to know at the time that it was the start of 63 Runoffs starts and counting, easily a record. His stated goal is to continue racing until the 2031 Runoffs. Why? His answer is, Why not?

Though he’s never reached the podium of the SCCA Runoffs, Weber’s best finish came in 2020 at Road America, with a fourth-place – so the attempt isn’t over yet.