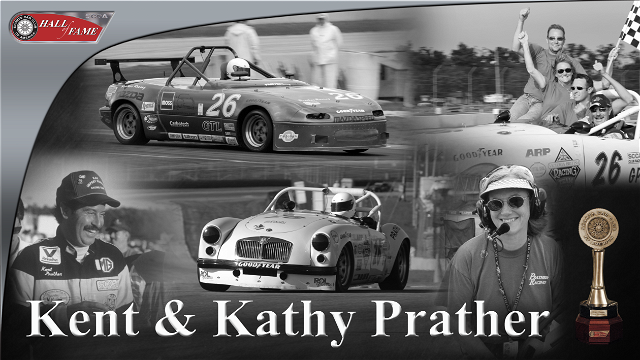 Kent and Kathy Prather epitomize the perfect racing partnership. While Kent was the face of Prather Racing, the business and at-track events would not have achieved the level of success it saw without Kathy’s crucial involvement.

Prather Racing grew to become the premier car and engine builders for multiple makes and manufacturers, but is closely aligned with British racing cars. On the track, Kent’s British racing engines were only rivaled by Huffaker Racing, led by fellow SCCA Hall of Famers Joe Huffaker Sr. and Joe Huffaker Jr.

Kent’s record as a car builder and driver is in SCCA’s top 1 percent. His eight Runoffs wins is seventh on the all-time list, with six of those coming in his iconic MGA in G Production, and two later in his career at Road America in a GT-Lite Mazda Miata. The first of those National Championships came in 1986; the most recent in 2012. Kent competed in an impressive 32 consecutive Runoffs and scored 15 Runoffs podium finishes during his career.

Those National Championships were paired with two significant awards – the first being the Kimberly Cup in 1986 for most outstanding driver in SCCA Club Racing competition, and then in 2005 when he was presented with the President’s Cup for ability, competitiveness, and success at the Runoffs.

Not just a Hall of Famer on the track, Kent’s involvement in leadership and support roles with Kansas Region and the Kaw Valley Race Group spans three decades.

While Kent was responsible for the on-track activities, Kathy was busy organizing paddock events and providing hospitality to the team, clients, and friends. It was sometimes said that during race weekends, every British roadster within a 100-mile radius could be found near the Prather Racing paddock.

Aside from specialized knowledge, resources, and meals for fellow British car enthusiasts, that same hospitality and camaraderie were also open to competitors. Kent and Kathy knew that the racing community is only what it is because of that openness to share and teach, spreading the gospel of the SCCA to whoever would listen.

Kent and Kathy still give back to SCCA locally and at the Runoffs. Kathy works Registration and Kent is Pace Car Chief for the Runoffs – an event neither intend to miss. And to this day, the Prather Racing shop remains open once a week in Topeka, Kansas, where racers of all types and abilities routinely stop by for encouragement, fellowship, and beverages.

Kent and Kathy Prather were inducted into the SCCA Hall of Fame in 2023.