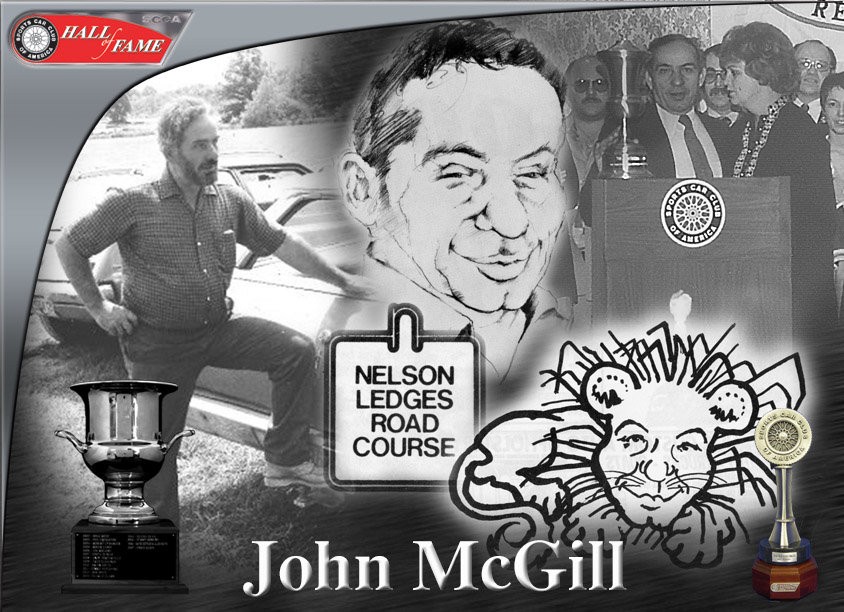 John McGill has touched the lives of thousands of SCCA members, many of whom didn’t even recognize it. But for those drivers in the Midwest who learned to drive at Nelson Ledges Road Course, or those who got their start in Flagging and Communications when a friend said “come to the race track with me,” McGill played a key role in their motorsports world. McGill formed Mahoning Valley Motorsports in 1970 to take over a track that had deteriorated nearly to ghost-track status in the 60s. Then called “Steel Cities International Raceway,” McGill added more than a fresh coat of paint to the renamed track. During his time there, McGill was known as the “General Overall Director” – or GOD, for short. At a time when major tracks like Mid-Ohio and Road America were utilized only a few weekends per year, McGill involved SCCA members not only on race weekends, but for general maintenance at the facility. With five Regions in two Divisions using the track, SCCA members felt as if they were owners, rather than customers, of the track.

Despite not having the reputation of a “pro” track, Nelson Ledges ran within its budget under McGill’s leadership. Nelson Ledges was a frontrunner in many programs that are standard at race tracks today, including tire barriers, a wide use of driver schools, member days, and showroom stock endurance racing. Through the years, no less SCCA racers than Paul Newman, Chip Ganassi, Bob Sharp and Bob Tullius made stops at Nelson Ledges, both for Regional Races and, more often, for the “Longest Day” endurance races. To the surprise of many, through McGill’s 30 year run as GOD at Nelson Ledges, McGill was simply an employee and not an owner.

McGill’s fondness for second chances and general kindness came to light after his passing. Many of the Nelson Ledges employees were given a boost by McGill, who had a penchant for giving homeless persons a full-time job at the track as a jumpstart to a new, productive life.

Since 1975, the John McGill Award has been given annually by the SCCA for significant contributions to the Club Racing Program. Chosen by the Club Racing Board and a National office representative of Club Racing, fellow 2018 inductee PatC Henry is among the recipients of the Award. McGill, of course, was appropriately named the honoree in the award’s inaugural season.