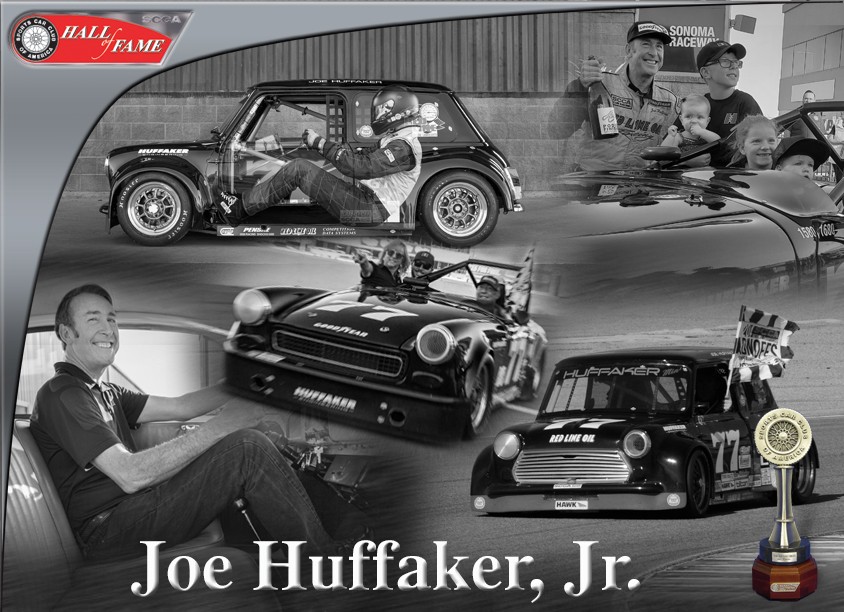 Joe Huffaker, Jr., learned from the best – and then improved on it.

Huffaker grew up in the garage, trailer and, of course, the home of SCCA Hall of Famer Joe Huffaker, Sr. The Huffaker Engineering team was the first job for “Little Joe”, as the now six foot five inch racer is known. He started there when he was 18 years old, officially, though that was just when he joined the payroll.

Soaking up knowledge and know-how from the family business, Joe took over Huffaker Engineering in 1991 when “Big Joe” retired. From there, Joe Huffaker embarked on two concurrent paths, both of which were Hall of Fame worthy.

Meanwhile, Joe had developed into one of the most successful racers in SCCA history, best known for a pair of cars that Huffaker Engineering had built and developed on their own.

Huffaker earned his first Runoffs win at Road Atlanta in 1992 after qualifying on the pole and finishing third in his debut the season before. But the legend truly grew at Mid-Ohio Sports Car Course.

In the 12 years the Runoffs were held at Mid-Ohio, Huffaker won seven times in two different classes. Huffaker won four times in F Production, and three more times in GT-5, before the Runoffs left Mid-Ohio and Huffaker retired from SCCA competition.

In 2014, however, the SCCA Board of Directors reawakened the sleeping giant. With the Runoffs now in a rotation that included a stop on the west coast at Laguna Seca, Huffaker came out of retirement with his famous Mini Cooper to win in GT-Lite. An additional F Production win in 2018 brought his 10th title, third most of all time. His 14 career Runoffs pole positions are third most of all time.

Through it all, Huffaker has remained humble and hard-working, with customers knowing that the prep level of their own cars will be equal or better to Joe’s when they step on the track.

Whether that’s enough to beat the boss is another story, and few have done it.