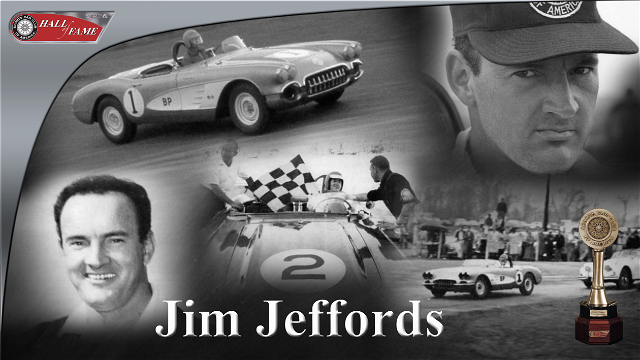 Jim Jeffords’ racing career may not have been the longest, but it was almost certainly unmatched.

The Milwaukee-area racer began his racing career in Jaguars, where he reportedly won 14 of his first 17 races. His run in the 1956 June Sprints got the attention of General Motors’ Ed Cole, who told him after the race, “That’s the last time you drive against us.”

That started the era of Jeffords’ Purple People Eater Corvette, the 1958 and 1959 B Production National Championship winning car made famous by both its color and Jeffords’ success behind the wheel.

In 1958, Jeffords also drove Harley Earl’s SR2 in SCCA events and at the 12 Hours at Sebring, and then a purple Scarab in 1959. The Purple People Eater won races in Nassau, with Jeffords becoming the first American driver in an American car to accomplish that feat.

Jeffords’ accomplishments are all the more impressive when considering the drivers he competed against. Dan Gurney, Sterling Moss, Carroll Shelby, Jim Hall, Bob Bondurant, Roger Penske, Ken Miles, and more were all at the top of their game when Jeffords beat them on track.

An unfortunate illness and long hospitalization led to Jeffords’ premature retirement as a driver in 1960 after just five seasons.

That didn’t end his motorsports career, however. Jeffords helped start the AMC Javelin racing team that ran in SCCA Trans Am competition, and managed the team in 1968 with drivers George Follmer, Peter Revson, Jerry Grant, and John Martin. His advertising business produced and published the Road America event posters and programs from the 1950s through the 1970s, which are now collectibles.

Jeffords served on Road America’s Board of Directors and as the track’s vice president until his passing in 2014. He is a member of the Corvette Hall of Fame, the Legends of Riverside, and the Road Racing Driver’s Club, and has earned Road America’s Governor’s Cup.

Jim was inducted into the SCCA Hall of Fame in 2023.